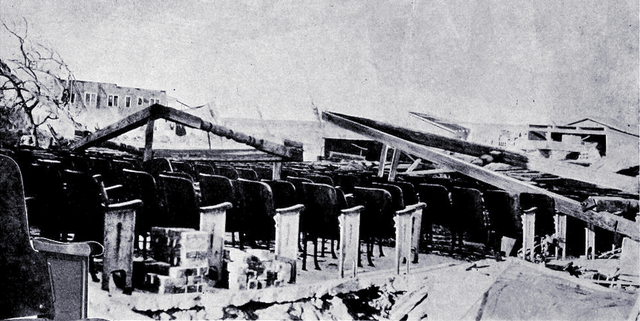 Replacing an earlier Dania Theatre, the 500-seat Dania Theatre was opened January 14, 1940. By 1941 it was operated by Paramount Pictures Inc. through their subsidiary E.J. Sparks.

The original Dania Theatre opened January 28, 1926 with architectural plans by John M. Peterman and constructed by Tubbs & Austin for the Wallerstein Theatre Circuit . The $50,000 theater was destroyed by a hurricane in September that same year and featured in newsreel footage.

The original Dania Theatre was rebuilt on the same spot by the same folks and reopened in 1927 on a new five-year lease. The theatre closed in 1932 at the end of its lease and not renewed due to economic conditions. The Dania was reopened in 1935 on a lease from April 1935 to December of 1939 by Darnia Amusement Co. headed by Lee Carrow closing soon thereafter. It reopened in 1936 on a three-day a week operating schedule by E.J. Sparks Circuit. Sparks closed the theater at the end of 1937. Darnia Amusement came back in 1938 to rekindle the theater and Sparks sued as the lessee later reopening the theater to the end of its lease on December 31, 1939.

Sparks decided to build a new Darnia Theatre (this entry) which is the one at 56 North Federal Highway architected by Roy A. Benjamin. It opened January 14, 1940. In 1946, the theatre was altered to add retail spaces and the back of the theatre seating area became storage reducing seat count. On April 10, 1956, a storm destroyed the front entrance of the building the same day that the Darnia Drive-In Theatre blew down. The front end was rebuilt still connecting to the auditorium. It became a long-running antique store into the 21st Century. The auditorium at last report was still intact with original elements.