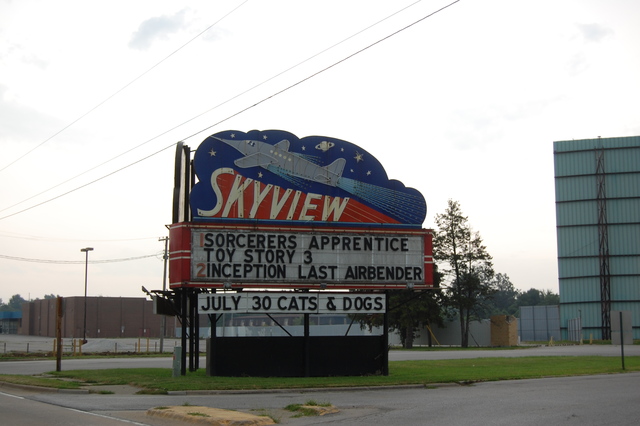 The Skyview Drive-In opened on July 8, 1949, with the film “On Our Merry Way”, and could accommodate 900 cars and had 200 seats for walk-in patrons. It was (and still is) part of the Bloomer family chain of theaters (BAC Theatres). It was only one of two drive-ins that the family actually built, along with the Cahokia in Alorton.

The 60-foot screen was destroyed in a 1955 storm and replaced by a 115-foot one, which was supposedly the largest in the Midwest at that time.

In addition to movies, the Skyview Drive-In offered a kiddie playground with pony rides, miniature train rides and a small Ferris wheel. Another storm on July 20, 1981 damaged the 115-ft wide screen, and it was replaced by a somewhat smaller one. A second screen was built not long afterward, making the drive-in a twin. The Skyview installed a radio sound system in 1995.

The theater’s season runs from April-November, and it is now the only remaining drive-in still in operation in the St. Louis region. by 2020 it was operated by the Theater Group Inc. chain

Anyone know if Screen 3 has been built or when it’ll be opened?

In answer to the above question, not this year, due to delays in the demolition of the Quad:

Dang…2 years, huh? Bummer. Wonder if Belleville is waiting on the DL to buy Bloomer out…which would mean THE END of the St. Louis area drive-in movie experience.

Don’t forget the Starlite Drive In in Cadet MO, which reopened last year after being closed for a couple of years. They haven’t yet reopened for the season, but hopefully will soon.

The Skyview has now been converted to digital projection on both screens. Still no news on when they’re building that 3rd screen, though.

The Google Street Camera car drove through this Drive-In in June of 2017. No 3rd screen.

KTVI ran a news video recently promoting the SkyView’s 70th Anniversary with its current owner, Steve Bloomer. It showed off the framed photos in the concession stand, and also had a framed full-page Grand Opening ad. From the date on the top of that newspaper, the SkyView opened on Friday, July 8, 1949.

The June 10, 1950 issue of BoxOffice reported, “The Bloomer Amusement Co. has installed an elaborate illuminated sign at the Skyview Drive-In. The sign features a fire-spitting neon rocketship roaring into space. The ship measures 35 feet high and 34 feet wide.” I think they meant that the sign, not the rocket ship, was that big.

This June 2019 piece though apparently inaccurate, does have recent photos. The comments has the “corrections”.