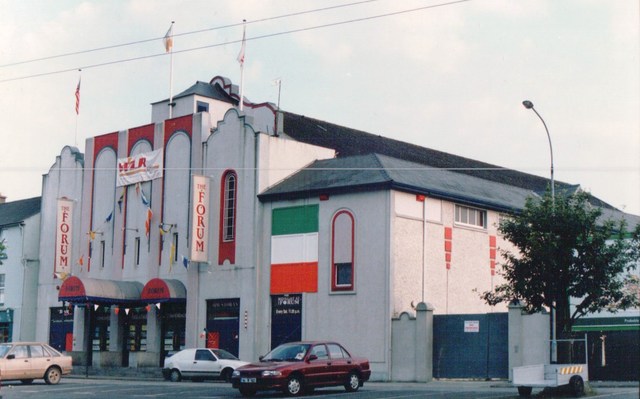 Located in Waterford, County Waterford. The Regal Cinema De Luxe was opened on 8th February 1937 with Grace Moore in “The King Steps Out”. It was built for and operated by Breen Entertainments and had 1,300 seats. It was equipped with a RCA sound system. The cinema also had a café for the convenience of its patrons.

The Regal Cinema was still open and operated by the Breen Entertainments circuit in 1966 but closed in the 1970’s and was converted into a bingo club. That closed in 1985.

The building was gutted internally and a new larger balcony was added, as well an a large stage and dressing rooms. In 1988 a new Art Deco style facade was added, to the designs of architect Paddy Nolan, and it re-opened as the Forum Waterford, a 1,200-seat theatre and entertainment venue on 1st April 1990. Stars who have appeared here include, Val Doonican, Kris Kristofferson, Johnny Cash, Billy Connolly, The Corrs, Van Morrisson and David Gray. This had closed by 2016 and the auditorium returned to bingo use. The foyer is a restaurant.

The live venue appears to have closed and bingo is back again. The foyer is now a Chinese restaurant. New photo uploaded.