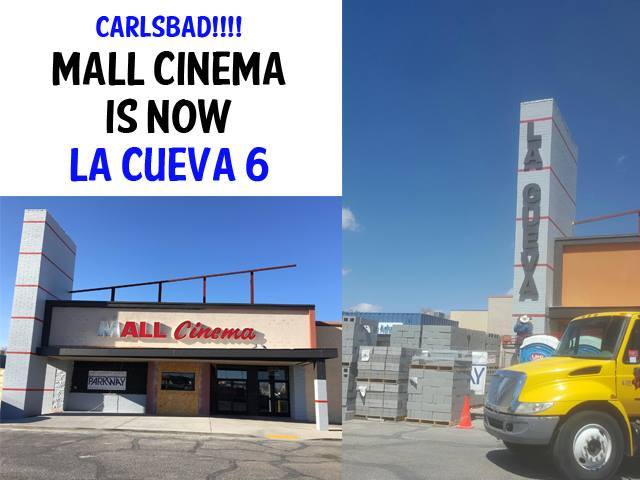 La Cueva 6, formerly known as the Mall Cinema 3, was completely renovated, with three added screens. Initially four screens were ready for the December 17, 2015 opening of “Star Wars: The Force Awakens", with ongoing construction extending into spring 2016.

Russell Allen, in the Carlsbad Current-Argus, said two of the auditoriums were cut in half and a new auditorium was built in the lot behind the snack bar. The theater also sports a new snack bar, remodeled bathrooms, and new rocking chairs.

According to the archives of the Roswell Daily Record, the theater’s history goes back to the late-1970’s. In April of 1978 it was reported that Commonwealth Theatres was planning on building a theater, designed by Mel Glatz, in Carlsbad. In 1988, Commonwealth Theatres sold their New Mexico Theatres to UA Theatres and in August of 1990 it was reported that Allen Theatres was buying from UA 11 New Mexico locations, including Carlsbad.

This theatre is currently operated by Allen Theatres. website