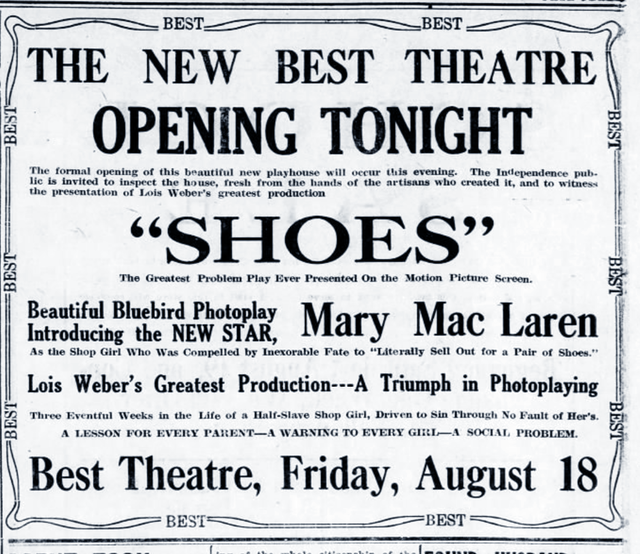 The Snark Theatre opened around October 1909. It became the Best Theatre on Friday, August 18, 1916 with a showing of “Shoes”. According to operator Joe Darragh it was the first theatre in Independence specifically designed for movies.

According to one source, after a five year lease expired it became the Quality Theatre. If that is the case it resumed it’s original identity by 1926.

Uploaded a photo of the opening announcement originally posted on the Booth site by dallasmovies.

Found an online copy of “Independence: The Way We Were” published by Ken D. Brown in 1986 which showed the address as 107 North Pennsylvania Avenue.

According to Mr. Brown the Best was actually in a pre-1900 building which had housed The Central Drug Store and an “amusement house theatre” named “Snark” rather than a fresh build in 1916.

The Best was acquired by William Wagner, who owned the other Independence theatres, in 1939. Now here comes a discrepancy. Mr. Brown claims the theatre was demolished in 1940 but it still appears in the 1943 Film Directory Yearbook.

The Yearbook was not always kept up to date. It’s quite possible the building was demolished in 1940.

If the building the Best was in had earlier housed the Snark Theatre, then there was a later Snark as well. The December 24, 1917, issue of the Independence Daily Reporter advertises both the Best and the Snark.

The Best’s ad uses the tagline “Home of the Photo Pipe Organ,” which suggests that the house had one of the semi-automated players that could be operated by someone without musical training, such as the American Fotoplayer, the Reproduco, or the Bartola.

An article in the July 28, 1921, issue of the Independence Daily Reporter provides some clarification of the history of the theater at 107 N. Pennsylvania Avenue. It said that the Snark Theatre, after some remodeling, would become the Best Theatre. The Snark had opened in 1909, and one of its original owner/operators, was Martin Johnson, a friend of writer Jack London, with whom he had sailed.

Johnson named the theater for London’s boat, soon to become famous with the publication in 1911 of his book The Cruise of the Snark. Johnson did not remain long in Independence, but within two years had returned to his career as an adventurer and documentary filmmaker.

The October 22, 1909, issue of the Independence Evening Star said that the new Snark Theatre would soon open in Charles Kerr’s commercial building, which had been extended to 110 feet. The seating area of the new theater, accommodating 400, would be 85 feet long.

The name Quality Theatre first appears in the Daily Reporter in late 1921. What I haven’t been able to determine is if it was the Snark/Best at 107 Pennsylvania that became the Quality, or if the Quality was the original Best Theatre, which had opened in 1916, reopened under a new name. I haven’t been able to find the address of the original Best Theatre.

Interestingly, the December 27, 1910, issue of the Daily Reporter has advertisements for five theaters: The Beldorf, the Snark, the Cozy, the Star, and the Joy.

Also interesting, there is a Snark Theatre today in The Martin and Osa Johnson Safari Museum at Chanute, Kansas.

The Cozy and the Joy are news to me. By rights the Bell and Vaudette were operational in 1910, as was the AirDome (on Pennsylvania, which was only open summers until 1928) but weren’t in the Daily Reporter you cite. Ad for the AirDome is next to the Best in the photos section above.

According to a comment by dallasmovies in a comment on the photo of the Best opening ad which appears on the Booth site, when the Best opened there was only a five year lease. It then became the Quality. Ken Roe found no references to the Quality in the Film Daily Yearbook. I found one reference which said it was closed by 1929, but another listed the Best and Quality both operating in 1927.

I’m inclined to go with it being the Best for five years, the Quality for a period and then reverting to Best until it’s demolition unless someone can prove otherwise.

The November 27, 1911, issue of The Evening Star gives the address of the Snark Theatre as 107 North Pennsylvania, and the July 28, 1921, issue of the Independence Daily Reporter, cited in my previous comment, is explicit that the Snark Theatre was to be renamed the Best Theatre.

The NRHP registration form for the Independence Downtown Historic District (dated 1990: PDF here) says this about the building at 107 N.Pennsylvania:

Ms. Rankin’s clothing store has since been replaced by Reflections Salon & Spa, but the original building, which dates from 1890, is still standing.

What seems most likely is that the operators of the Best Theatre took over the Snark and renamed it the Best when their five year lease on their original location ran out in 1921, and then the owners of the original Best building leased it to new operators who reopened it as the Quality later that year.

Well, there are photos relating to the Quality, on the Booth site, supposedly 1922. But the name Quality never appears on Film Daily Yearbook lists.

The March 11, 1922, issue of the Daily Reporter has advertisements for the Beldorf, Best, and Quality Theatres, so the Best and Quality had to have been different houses at that time.

I found another reference that the Best and Quality were both operating in 1927 but the Quality closed in 1929. Odd that there was nothing on the Quality in the FDY. Ken Roe found references to a 400 seat Strand in the 1926-1929 FDY and that it was closed in 1932. Independence was alive with theaters many of which seem to be once source wonders.