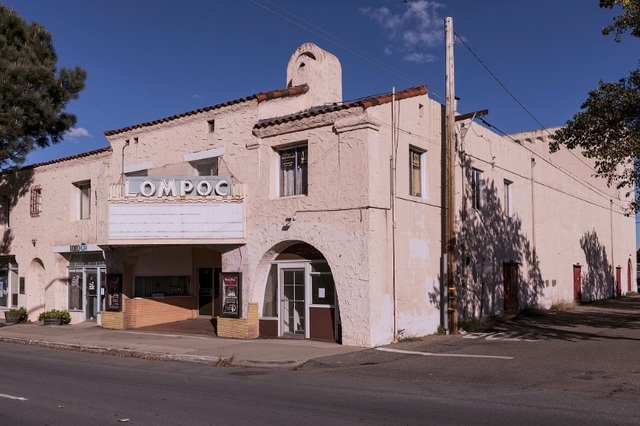 Constructed in 1927 by the Lompoc Knights of Pythias, the Lompoc Theatre is located on North H Street. The Lompoc Theatre opened on May 27, 1927 with premier showings of George Sydney in “Lost at the Front” and Andy Grump’s “Circus Dazs”. It hosted traveling vaudeville, local dramatic productions and movies. Dressing room area was located under the stage with access via door into orchestra pit and via stairs to backstage area.

The theatre was closed for fourteen days in December 1954 for a remodeling, reopening with Elizabeth Taylor in “The Last Time I Saw Paris”. It had a new marquee, new seating and expanded lobby. New bathroom configuration eliminated stairs to the “crying room” and projection booth. Access to upstairs is now via stairway from exterior, which also accesses second floor office space. Crying room is no longer a feature. Previously, the lobby did not include a snack bar and ticket booth was in the center of outside foyer. The remodel project placed the ticket booth to the side, accessible into a newly expanded lobby, including snack bar. A CinemaScope screen was also added in the remodel.

When constructed in 1927, the theatre was considered the most technologically advanced facilities on the West Coast. The projection room includes a 1950’s tube powered sound amplifier system, a very old Simplex projector and relatively new platter system.

The Calvert family, the original owners of the Lompoc Theatre, closed it in 1975. It was then leased out to several independent operators and finally closed its doors in the early-2000’s. In March 2008, plans were confirmed to restore the building into a performing arts center, to be named the Calvert Performing Arts Center. Work was planned to begin in three months, with a fall or winter 2009 opening for the project, which is costing just under $9m. This never got off the ground.

In January 2016 it was taken over by the Lompoc Theatre Project who began restoration on the theatre to become a community arts theatre.

C.D. Reiner and Son of Santa Maria California had the general contract for the construction of the Lompoc Theatre. Local contractors did most of the construction. Decorative interior painting was done by Verne Laney of Hollywood. Scenic equiepment were built by Los Angeles Scenic Studios. Over $100,000 went into the project — approximately $59,000 in the bare building alone, $22,000 in the new pipe organ, $6,000 in the seats and $3,000 in only a part of the curtains. Publicity director of Universal Film Corporation, Howard McBride, presided as master of ceremonies at the theatre’s opening on May 27, 1927.

This article from the Santa Barbara Independent issue of July 5, 2007, suggests that the start of renovation for the Lompoc Theatre is waiting only on a bit more fund raising.

There was a multiplex in Lompoc in the eighties. I recall seeing a film there around 1988. Unknown if it still exists.

The renovation is slowly getting underway. About time.

The Lompoc Theatre’s official web site appears to be dead. I’m getting a 404 error.

2010 and the site is still dead. Judging from that ‘84 photograph, the Lompoc is emblematic of the small town theatre – there’s even a Christian Science Reading Room next door!

Update! Local nonprofit organization working to restore, reopen Lompoc Theatre as multi-use stage/screen venue! Get on board at LompocTheatre.org, or facebook.com/Lompoc.Theatre.Project