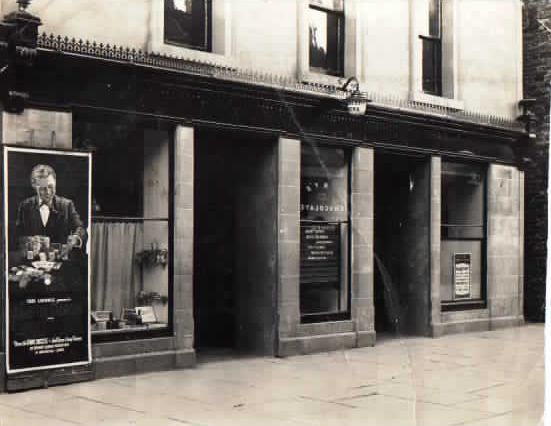 In Kirkwall, in the Orkney Islands, D. B. Peace closed his Electric Theatre (see separate entry) and, bringing his picture business up to date, opened the Albert Kinema on 8th June 1931.

The first ‘talkie’ was “Blaze o' Glory”, starring Frankie Darro and Eddie Dowling. The projection equipment, as at the Electric Theatre, was Gaumont machines with BTH lamp houses. Colin Park was one of the projectionists. Alex Leisk who, throughout the war, had been with ENSA, joined the Kinema staff as a projectionist in 1946.

One of the greatest moments in the history of the Albert Kinema came when it was chosen to present the world premiere of a film adapted from a book by an Orkney author and shot in Orkney’s famous anchorage of Scapa Flow. The author was J. Storer Clouston; he and the director, Michael Powell, were present at the first public performance of “The Spy In Black” starring Conrad Veidt.

The cinema performed an indispensable service to troops and civilians alike during the war years, with Mrs Shearer’s tea room, which had been set up within the Albert Kinema, having to be removed to make way for extra seating [adding an unknown number to the original 300 seats].

But tragedy struck on the morning of Thursday 8th May 1947. Flames were seen shooting from the upper windows of the Albert Kinema by Boots the Chemists store man John Cooper, and soon half the town was out to watch the fire brigade in its ultimately unsuccessful attempt to subdue the blaze. The crackling of the asbestos roof lining could be heard as far away as Kirkwall Golf Course. “It was some blaze” recalled Dougie Shearer, who had watched the inferno from the upstairs of his home next door to the Albert Kinema. Such was the ferocity of the blaze that there was a fear that nearby premises could catch light, and gunsmiths A. M. Morgan had to move their stock of ammunition to safety for fear of explosion. In an hour or so all that was left of The Albert Kinema was a burnt out shell.

But the town was not without a cinema for long. A lease was taken on a Temperance Hall that had operated as a Royal Navy Cinema during the war, and that became the Albert Kinema until the appropriately named Phoenix Cinema arose from the ashes (albeit on a different site) in 1955. (See separate entries for these two cinemas.)

(This narrative has been sourced from ‘The Cinema in Orkney’ by Kenny Thomson, published at scottishcinemas.org.uk)