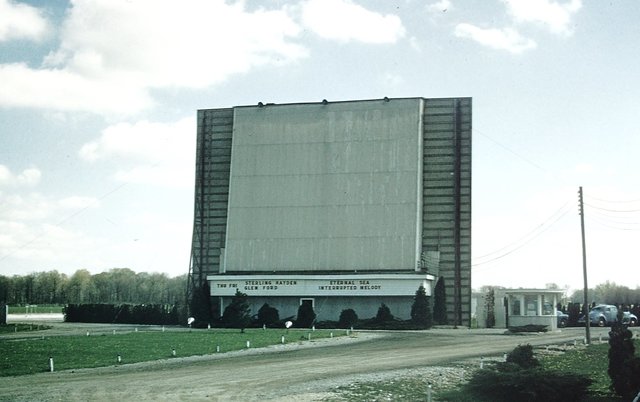 The Piqua Drive-In opened on September 18, 1947, screening the 1944 drama “Home in Indiana” with Jean Crain and Walter Brennan. The new airer was opened by Richard E. and Robert G. Gump with Dr. A. J. Denlinger. The manager/operator is Harold Thomas. Built at a cost of $60,000, the new theatre featured DeVry projection equipment screening films on a 48ft. x 56ft. screen tower. Car capacity was 450 cars with in-a-car speakers. On March 19, 1948, a severe storm blew down the screen tower and did minor damage to the theatre.

The screen tower and drive-in was rebuilt for the opening in the spring of 1948. Paul Swinger and Fred Krim were the operators from 1949 to 1955. On April 10, 1958, Robert Gump sold the Piqua Drive-In to C. Mitch Blackschleger (dba Piqua Drive-in Theatre, Inc.) The last owner was Chakeres Theaters Inc. from Springfield, Ohio, who purchased it on October 19, 1962. For the most part Chakeres rebuilt the drive-in with a new screen tower, all new sound /speakers and a new concession stand. On May 28, 1963, the new Piqua 36 Drive-In was relighted for the next 30 years. After operating/owning it, Chakeres finally closed it at the end of the 1993 movie season. The drive-in was demolished and the property was sold. It is now a landscaping mulch yard.