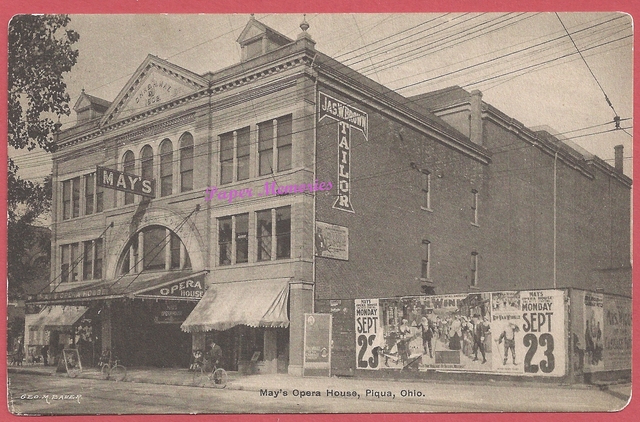 Andrew Crain Morrison’s highly reliable book Theaters gives the address of the Miami Theatre/May’s Opera House as 207-209 N. Wayne Street, and says that it opened on February 10, 1903, with 1,360 seats.

Memoirs of the Miami Valley, published in 1919, mentions May’s Opera House at the corner of Wayne and Water Streets. The house was built by Charles May and was the largest theater between Dayton and Columbus.

Another source says that May’s was on the northeast corner of Wayne and Water, but this 1913 photo shows that it was on the second lot north of the corner. Today there is a parking lot at that site, so the Miami Theatre has been demolished.

Memoirs also mentions a Bijou Theatre on Ash Street, opened 1903 for vaudeville, a movie house called the Strand, opened in 1915, and the Favorite Theatre, a small movie house on N. Main Street.

A partial list of works by Chicago architect George Otis Garnsey (1840-1923) lists an opera house built for Charles May at Piqua, Ohio, in 1902-1903 as one of his designs. Garnsey had about forty theaters and opera houses to his credit, most of them in small midwestern towns.