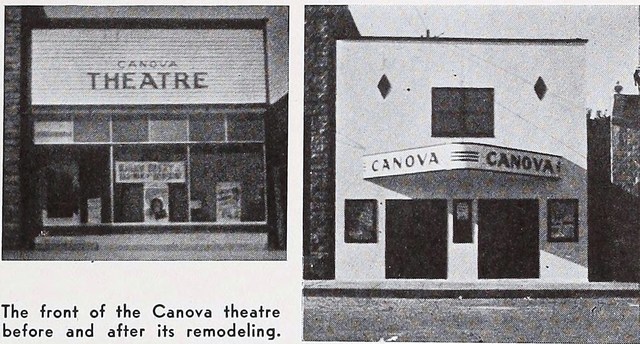 Newspaper Editor/Politician Dean C. Trippler opened the Canova Theatre in the small town of Canova on June 5, 1935 despite a population of fewer than 400 residents. Trippler’s wife was the cashier and Trippler trained his sons to be the projectionists.

It was Trippler’s second attempt at a theatre in town after a silent era theater failed. His second attempt was a success lasting almost 35 years and operating four days a week at its peak. Merchant co-op advertisements and subscription ticket plans proved successful.

The converted retail store was under construction several times in the Canova’s first three years to improve the presentation. The theatre’s air conditioning installed in 1935 was quite popular. The ceiling was raised three feet to accommodate a better projection throw and sound proofing was added in that period.

Big news occurred when Trippler met actress Judy Canova at her personal appearance at the Corn Palace in 1953 giving her a picture of the theatre. Trippler booked “Oklahoma Annie” starring Canova weeks later.

Continuous operation of the Canova Theatre ends in December of 1958 when the theater closed. It reopened for a special screening in July of 1959 as part of a 75th anniversary festival for the town of Canova. Trippler reopened the theatre for regular shows in August of 1959 and discontinuing operation by year’s end.