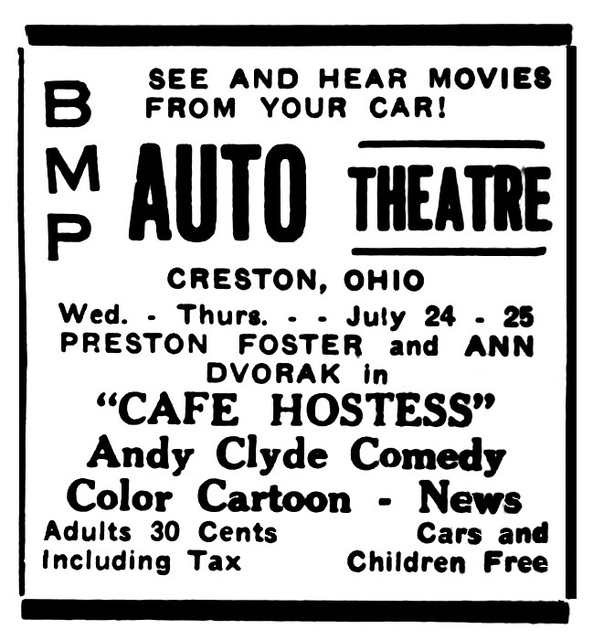 On July 24, 1940, the BMP Auto Theatre opened screening the 1940 drama “Café Hostess” with Preston Foster and Ann Dvorak. I believe that this is the correct date for the opening. The 250 car capacity drive-in was opened by BMP Auto Theatre Inc. from Akron, Ohio. BMP was incorporated in September 12, 1939, with S. E. McFarren, as President. The board of directors included S. E. McFarren, C. A. Pierce and Irene M. Striver. The agent for incorporation is L. M. Buckingham. M. C. Brooks was the operator when it opened. One thing to note is from an article in Box Office from September 30, 1939, that M. C. Brooks opened a drive-in theatre in July of 1939 in Farmdale, Ohio. Later in the same year Brooks moved the drive-in theatre to Creston, Ohio, where it was reopened with accommodations for 250 cars. It had outside blast speakers for the sound system. Maybe Brooks formed a partnership with S. E. McFarren and Pierce?

On December 13, 1946, the BMP Auto Theatre Inc. was dissolved and the drive-in was sold to Ralph Martin and Edward Cain from Akron, Ohio. On May 9, 1947, the drive-in reopened as the Auto Theatre. In 1950 it was opened as the Creston Auto Theatre. It is listed in 1955 has being operated by T. McKnight in the 1955-56 Theatre Catalog. I could not find any movie advertisements/information past 1953 so apparently it closed at the end of 1953. Any additional information would be appreciated.

One thing to add is the BMP Auto Theatre was one of the first auto theatres to open in Ohio.