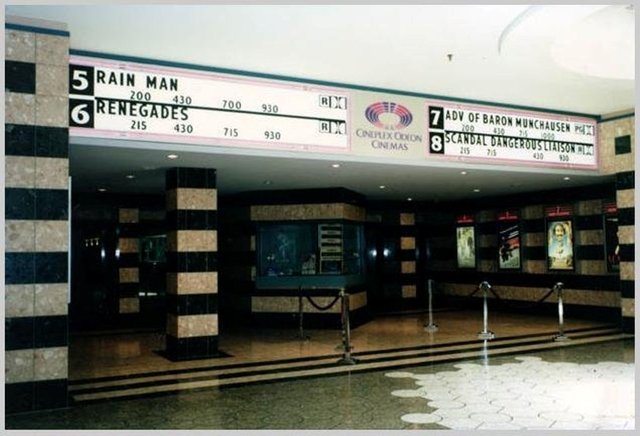 This was a theater located in Hilltop Mall in Richmond. Four screens can be entered downstairs and the other four were entered at the mall’s upper level. Plitt opened the 4-screen Hilltop Mall Cinemas on August 25, 1976 showing first-run fare. Later Cineplex Odeon took over and the theater became an odd mix of first-run and discount house (one level was first run, the other level was discount house.) and became an 8-screen theater on December 16, 1988.

The theater closed in the mid-1990’s as a discount house. A 24 Hour Fitness now occupies a part of this property. It is near the current Century 16 Theaters.

I remember this theater as the “dollar theater”. You would pay $1 to catch your discount flick, but not before you got “padded down” by security on the way in! Charming.

I visited this theatre at the start of my theatre fascination. The original 4-screens downstairs were the orange bowling alleys that Plitt built originally. The length of them always suggested to me that perhaps it was originally a twin that had walls built down the center of each auditorium. Seriously, each auditorium had a center aisle with four seats on either side, 30-rows deep. The box office was located outside in the mall passageway. At the entire opposite end of the mall, Cineplex Odeon built another 4-plex that matched more of their mid-90’s motif with the marble tile and purple seats.

A former employee of mine worked there, and the Hilltop Mall did not have the best clientelle. I was told that they performed all their banking at one of the theatres, which meant having to transport drops and deposits back and forth through the mall while being escorted by security.

i have some good memorys coming to this theater . i remember going here in the mid 80s to see the Return of the Jedi with my sister and brother that had to have been like 1983 or 84 . the last time i seen a movie here was in 1998 it was a second rate showing of the Titanic movie i was on a date . i belive the theater closed not long after that now it’s a 24 hour fitness and millitary recruiting offices .

heres some pictures of this theater ,

This was a hard theater to keep a Manager in because when the built the other 4 screens upstairs, One Manager for both houses and 1 projectionest for both locations Scheduling showtimes was hell, because you had to leave enough time for the projectionest to get back and forth without killing him, always the downstairs played the move over from the new theatre upstairs, We discounted the downstairs theater after the first year. they had to do 2 seperate inventories payrolls and split the booth hours also we hired many house Managers for the lower theater , It was a very seedy customer base after dark when you were Manager if you could not get through the mall after closing you had to walk around the outside to get back and forth taking every risk of getting shot at I was the District Manager for this Theatre and I was shot at one evening when doing a theatre visit walking outside to the other theater, That ended my night visits for that location

That’s silly. The mall wouldn’t let you walk through after hours? How did they stop you from doing so?

This theater was actually my first job. I ended up being a manager there and was there the day we shut it down. The theater was initially Cineplex Odeon when I started working there, eventually Sony bought the theater and we were called “Lowes Cineplex”. After a few months Sony started building their Metreon theater in S.F and they announced they were closing the Hilltop theater.

As far as nightly deposits we did not have to walk outside of the mall. We would call the mall security office and let them know “This is theaters 1-4 is it ok to do the drop”, they would tell us yes, and we would walk through the mall and drop the deposit into a Bank of America deposit box. On Sunday’s the mall would put up the gate because the mall closed at 6 and they didnt want people in the mall so we would have security come after we got everyone out and they would come open the gate for us.

We did have a projectionist for a while but eventually the managers we just started running the films.

4 more screens opened on December 16th, 1988. Grand opening ad in the photo section. I believe this was the only Cineplex Odeon “Jewelbox” location in the bay area. 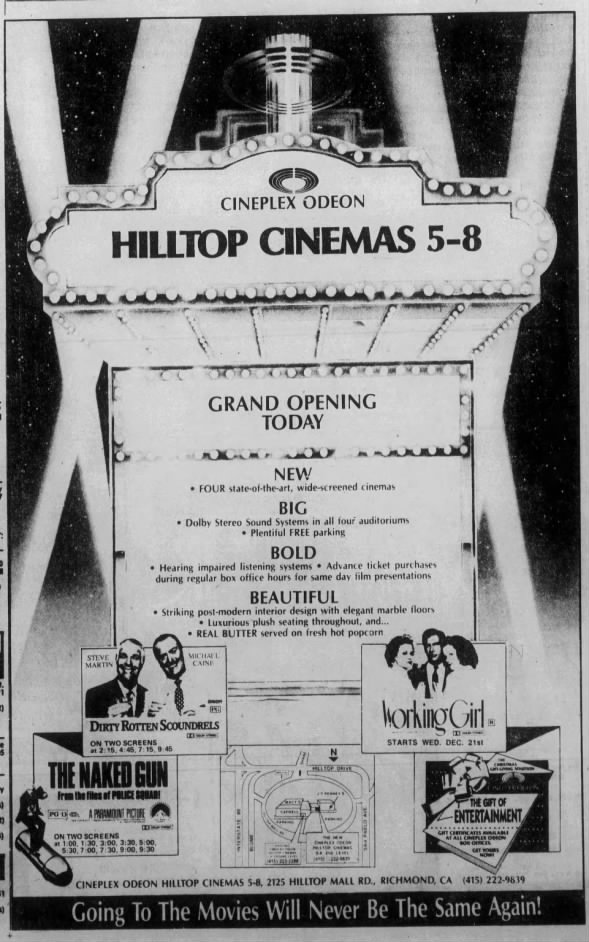