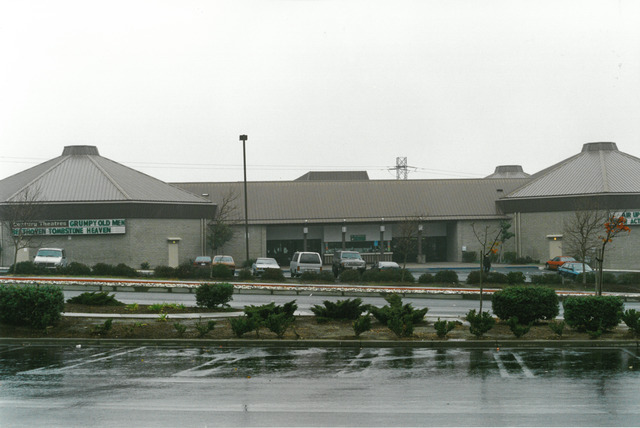 Opened as the Century 9 on March 29, 1985, it was a Syufy Enterprises multiplex (with domes). The theatre was closed in 2001 shortly after the opening of the nearby Century 16 in Richmond. Showed first-run fare. It was demolished in 2002 and a strip mall now occupies this site.

i remember going to this theater many times in the late 90s till it closed . i remember going on a date here to see the movie scream i also seen star wars the phantom menace the last movie i saw here was like in 2000 was a hip hop movie called thicker than water .it closed and was torn down not to long after i seen this movie i do have meny memories at this theater i actually seen more movies then this to many to name . now it’s a strip mall with a krispy kream donuts and subway sandwhich and panda express i do miss this theater old school memorys …

heres some pictures of this thater ..

Ironically, the Krispy Kreme has been closed for the last several months.

heres some pictures of this theater in 1989 .

The address was 1491 Fitzgerald.

Like all the other theaters built for Century between 1964 and the early 1990s, Century’s Pinole 10 was designed by Vincent G. Raney. The Pinole 10 was very nearly identical to the Century 10 at Noor Avenue and Huntington Avenue in South San Francisco, which opened just a few months after the Pinole house.

The South San Francisco building is still standing, though it has been gutted for a bowling center project that was never completed. Still, Google’s satellite view of it still gives a good idea of what the Pinole multiplex looked like on the outside.

This theatre though similar to the Century SSF in layout is more similar to the Century Ventura as it had the corrugated metal roofing/octagonal domes whereas SSF had the more rounded shingle domes. Otherwise, all three theatres were nearly identical and all three started out as 8-plexes that were added onto. (Pinole & SSF to 10 buy adding a 2-screen box to the end of the building, and Ventura to 16 by adding an 8-screen stadium addition).

Can we reset the map to not be centered on the Century Hilltop 16 which is on the entire opposite side of the freeway from where this theatre was?

The Pinole 10 was about where the FedEx Office and Auto Zone stores are now. They are some distance east of the spot Google Maps is putting the pin icon. Views at Historic Aerials show that the theater had been demolished and construction started on the shopping center that replaced it by 2002.

Not to be one of those guys, but the theatre was actually called the “Century 10” or “Century 10 Pinole” and never really the Pinole Cinemas. Just uploaded a photo too.