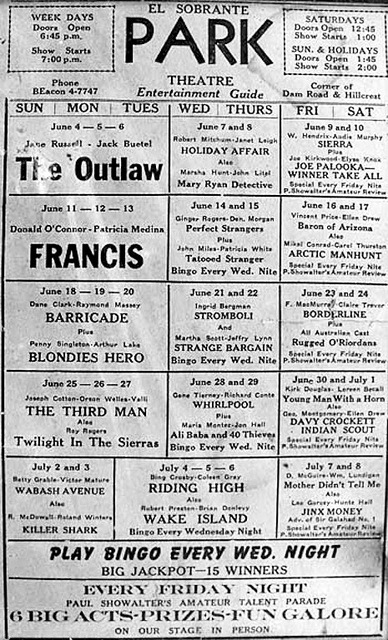 The Park Theatre was opened September 29, 1949 with Donald O'Connor in “Yes Sir!, That’s My Baby”. This theatre was a single screen that was twinned in the early-1970’s and closed in 1976. It is now used as a church. The marquee is still intact.

Shouldn’t this be “Closed” instead (as a movie theater)?

I was a projectionist at the Park from the mid-1960’s until the “slaughter” as I refer to the twinning of it. I remember the kiddie shows as I worked there most weekends. I thought it was a very nice movie house and wished I had the idea of shooting pictures of the interior/exterior. I took it for granted, but remember those days in the projection booth.

I don’t remember a smaller screen behind a widescreen, but this part may have been removed by the early 1960’s. Remember, movie screens had holes in them to allow the sound to travel through. Carbon-arch lighting was used and 50% of it was lost because of the holes.

I had to go backstage on several occasions and would see the “images” on the back wall as they passed through the holes. I never noticed a screen in back of the one used and it would have been unpractical because of the sound problem. Believe it or not,
the maximum watt output in those days was only about 25 watts; the acoustics of the building carried the sound throughout the auditorium. Theaters were built like that since the days of the “talkies.” Today, with high-power amps, all “shoe-box” auditoriums, as I refer to Multiplexes (I hate them) are designed to
absorb sound waves so there will be no acoustic reflections; in other words, the walls are “dead.” Add to this the lack of a curtain, a 4000-watt Xenon light bulb versus the 25K carbon arch, lack of a projectionist, and one misses the “good old days” of excellent movie presentation in an atmospheric, live acoustic auditorium.

Thanks for those first hand comments Trainmaster! The old stage, screen and curtain were definitely there behind the widescreen when I was growing up in El Sobrante. They may have been removed when the Park had some additional remodeling done after I left El Sobrante in 1958. That’s when the screen curtain was put back in and the screen size reduced just a bit…a big improvement by the way! I only saw the Park in that form one time, on a return trip to my old stomping grounds. I still remember the features were “Hud” with Paul Newman and “Fun in Acapulco” with Elvis…and a trailer for “Dr. No”. (What a memory eh?)

The Park was the first Richmond area theater to go wide screen (cropping even the older films!), even before they played any CinemaScope films. They replaced their original stage, screen and curtain with an almost wall to wall non curtained screen, approximately 1.85:1 ratio. That screen was soon replaced with a slightly wider screen with about a 2:1 ratio. Scope fllms were shown letterboxed on both of those screens, not a system I approved of since I always believed that Scope films should be presented wider than “flat” (1.85:1) films. The reason I know the old stage and screen were still there was on rare occasions a staff member would go behind the screen before the show and turn the lights on. Like you mentioned you could see right through the new screen and I could see the old stage and screen which I fondly remembered from my early days attending the Park. At time I was amazed they were still there!

The regular projectionist at the Park when I was growing up was a gruff but good hearted middle aged gent named Lee. He let me come up to the booth a few times. “You’re not supposed to…but come on up!”. As I recall it was one of the more spacious projection rooms that I’ve been in.

I couldn’t agree more with your opinion of modern day multiplexes, automated projection and crummy presentation!

i pass this old theater all the time i live in san pablo .always wondered what it was called in it’s movie days and when it closed i always go to the railys supermarket nearby now i know i little about it …..

The Park was an independent theater that opened on Thursday September 29, 1949. It was built and operated by E.M. Jeha who at the time also operated the State in Benicia. Mr. Jeha’s son Richard (Dick) Jeha was the Park’s manager throughout the 1950’s when it was my neighborhood theater. DIck Jeha was a genuine “good guy”, known and liked by almost everyone in El Sobrante. He also displayed lots of patience with us rowdy kids and teenagers. My love affair with the movies and movie theaters started by passing out monthly programs for the Park in return for a monthly pass. Initially there were three program changes a week, then two and finally one by the end of the 1950’s. Except for rare major blockbusters, all were double features. Saturday matinees included a Republic or Columbia serial chapter and five cartoons in addition to the regular program. A Friday night Bingo game, conducted by Mr. Jeha was a popular feature for several years in the 1950’s. When wide screen and CinemaScope came along, a wall to wall screen was placed in front of the original and more attractive stage, screen and curtain. Magnetic stereo sound was not installed and 3-D died before it could make it to the Park. In the early 1960’s the Park was remodelled with a slightly smaller wide screen and the welcome return of a screen curtain. Unfortunately it was pretty much ruined by twinning in the early 1970’s, just a few years before it closed (1976) and became a church, which it remains to this day. As I was reminded of at a class reunion 25 years later, most all of us who grew up in El Sobrante in the 1950’s have very fond memories of the Park.

This question is to trainmaster and Johnrice. Does the Parks has a stage? Could it be converted to an actual theatre to host musicals, dance and musical performance. From Crocket to El Cerrito there is not main performing arts center and I’d like to start one which of course would entail rights you use the theatre and a board but with 220,000 people between El Ceirrito and Crockett it could be supported. Also do you have any pictures you could send me of the interior. It would take the support of local business and a crowdfunding of at least 50K to get things up and running but I have thousands of facebook friends with other friends doing the same the same. Please sned me your thoughts. If it were to be used as a double cinplex could it be quickly altered to suport a performance. Also how many does it seat total? Thx, C