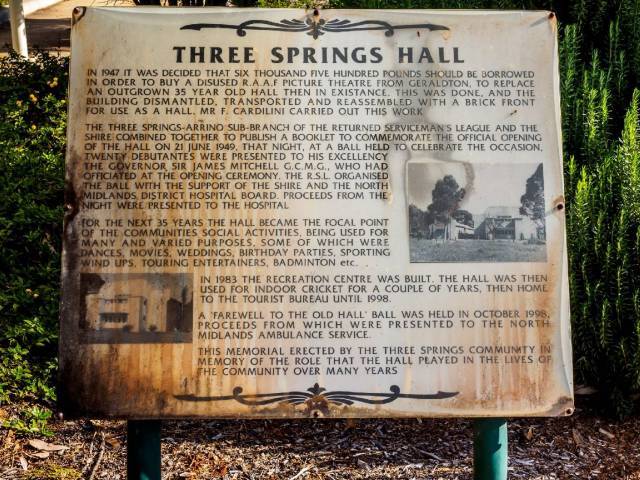 Located on the southwest corner of Railway Parade and Hall Street. The first hall was opened on 20th June 1912. Movies were screened from 1912 to the late-1940’s. In 1947, the Roads Board purchased a former RAAF(Royal Australian Air Force) base cinema from a air force base at Greenrough, Western Australia. The first hall was demolished. The new hall opened on 21st June 1949. Movies were screened from(1949 or 1950?) to the(1960’s?) when the Three Springs Drive-In opened.

The hall was then used for community and indoor sporting events, and then in the 1980’s became the Tourist Information Centre. The hall closed in October 1998 with a dance. The hall was demolished(due to damage from white ants(termites) ). The site is now a park(Federation Park). There a plaque(sign) about the hall, with the(foundation stone of the hall?) underneath the sign.