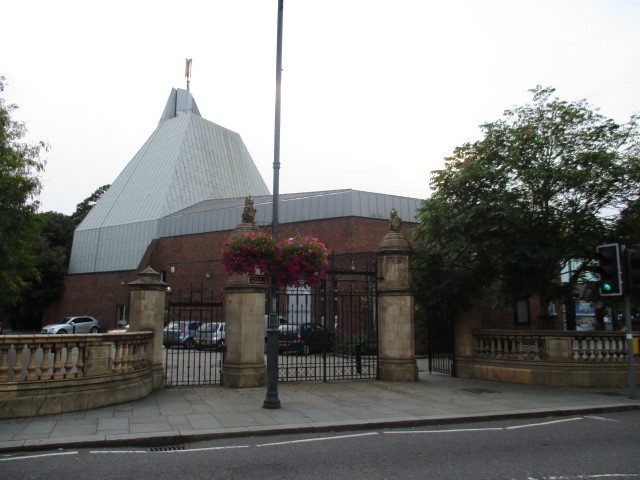 In Hertford, the county town of Hertfordshire, the Castle Cinema closed in November 1959. The building stood derelict for many years before being demolished. The site was used as a temporary car park until a new civic centre, Castle Hall, was built in the 1970’s. That venue hosted many events, including screenings by a film society, but became ‘tired’ and a replacement was sought.

That arrived in 2010 in the shape of the Hertford Theatre. (I understand there was an economic link with the J. D. Wetherspoon pub circuit, which built ‘The Six Templars’ next to the theatre.)

Aside from ancillary meeting and function rooms, a gallery space and a café/bar the theatre has two auditoriums. The main one has retractable seating and state of the art audio and lighting systems, and is used for a wide variety of live events and presentations, with a maximum seating capacity of 400. It also has digital cinema facilities, complete with Dolby surround sound, and hosts a regular film programme (including NT Live and Encore screenings), for which the seating is slightly reduced to 361.

The second auditorium is the fully flexible Studio, which has a sprung dance floor, ballet bars and floor to ceiling mirrors, and is mainly used for classes, workshops and auditions.