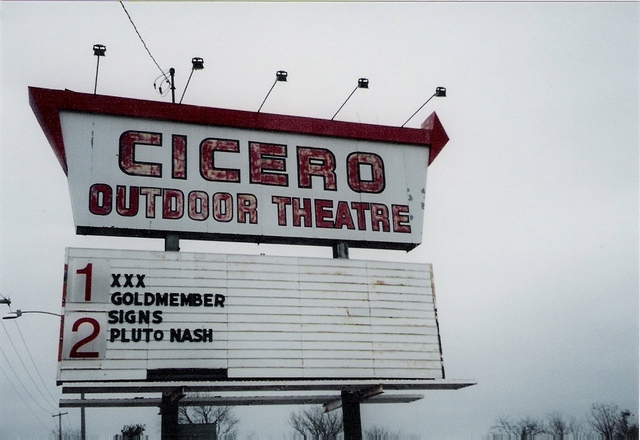 The Cicero Outdoor Theatre opened in 1969, as a single screen drive-in. The opening movies were Gregory Peck in “The Stalking Moon” & James Garner in “How Sweet It Is!”. It was located on Cicero Avenue in Monee. Around 1982, a second screen was added, and the theatre became the Cicero Twin Drive-In.

At the end of the 2002 season, the drive-in was closed for good, and was entirely demolished in the fall of 2003.

This drive-in opened May 2nd, 1969
I uploaded the grand opening ad at www.drive-ins.com

We only went here a few times as it was usually chaos by the early nineties. Seven of us piled into a pick-up to see Eddie or Set It Off? Who knows. It was fun and a shame teenagers today can’t have drive-ins w/o the fear of getting shot.

A friend and I saw “The Godfather” at the Cicero Twin Drive-In. It was a very oddball, strange setting in which to see the classic Francis Ford Coppola film. I don’t remember a lot about the place but I do remember thinking that, due to the sheer amount of acreage used that it was kind of an antiquated though charming concept.

It broke my heart when I went by the area this theater was at in 2006 and found an empty field. I saw so many of my favorite films there. Also, there were 2 screens in 1980 so they had to have added the second one earlier than ‘82.

I saw many films there but by far the best was Grease. I am thrilled I got to see that at a drive-in. I went as late as 2000 and by then it got a bit dicey. There were people asking for drugs and what I believe were gang members (though luckily none caused trouble). The only time I went to the drive-in with a guy was here in 1999 (though the relationship was strictly platonic). I had heard in 2002 they were planning to close and the last movies played were those in the sign (XXX, Goldmember, Pluto Nash and Signs). Had I known for sure 2002 was the last year I would have gone. A few years later I talked to someone in University Park or Monee (this theater was on the border)and they told me it was basically torn down because the owners just didn’t want it anymore. How sad, especially since nothing is even there, just land.

and the foundation of the concessions stand and the ramps for both screens.