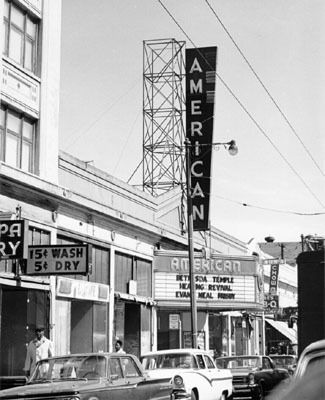 The American Theatre opened on December 31, 1909 as part of the block square Chutes Amusement Park, the fourth and last of the Chutes enterprises that were once amusement playgrounds in San Francisco from the late-19th through the early-20th century.

Within a few years, the rest of the attractions that made up the park faded into history when the park was destroyed by fire on May 29, 1911, but the original theatre structure remained, and re-opened on September 4, 1915 as the Lyric Theatre, after a remodel to the plans of architect James Rupert Miller. Alterations were carried out in 1920 to the plans of architectural firm Reid Brothers.

As the American Theatre, it served the Fillmore Street neighborhood as a low-priced, last run film theater for about thirty years, finally closing in the mid-1950’s. It was torn down soon afterwards as part of the neighborhood redevelopment project.

The Film Daily Yearbook, 1941 gives a seating capacity of the American Theatre as 1,210.

An undated photo from the SF Public Library:

The Fillmore Street location of the Chutes Amusement Park didn’t fade into history so much as vanish overnight, as most of it was destroyed in a memorable blaze on the morning of May 29, 1911, a little over two years after it had opened. The park had sported both a movie theater and a vaudeville house, and I’m not sure which of the two it was that survived to become the Lyric. The July 15, 1916, issue of The Moving Picture World had a paragraph about the house in an article about San Francisco’s movie theaters:

“The Lyric theater on Fillmore street, between Turk and Eddy, was erected several years ago, but only recently was devoted to moving pictures. This house was formerly a part of the Chutes and after that amusement enterprise went out of business was dark for a long time. It was recently turned around at a heavy expense and an entrance installed from Fillmore. It has a seating capacity of 1,100 and is conducted by Ackerman & Harris, under the management of Charles Cole.”

A few years after the reopening, the Lyric was again remodeled. The February 14, 1920, issue of Domestic Engineering ran this item:

“Architects Reid Bros, are planning alterations on a motion picture theater at 1226 Fillmore Street. The improvements will cost $20,000 and will include new plumbing and ventilating systems.”

Here is an item from the February 17, 1915, issue of Building and Engineering News about the alteration of the Chutes Theatre that took place that year, when it was converted into a movie house:

“THEATRE ALTERATION — Concrete and steel. Cost not stated. San Francisco. Architect, J. R. Miller, Lick Bldg-, S. F. Owners, Realty and Rebuilding Co. The old Chutes Theatre will be moved to the rear of the present stores on Fillmore street between Turk and Eddy streets and a new entrance and other alterations made to conform with the law. Plans are complete and work will be started shortly.”