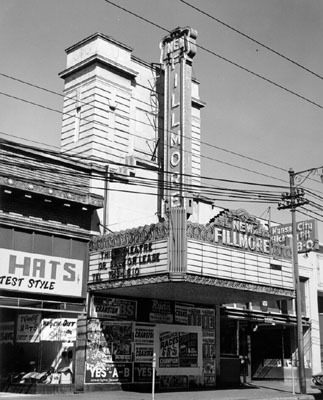 The New Fillmore Theatre, originally designed by the Reid Brothers, opened on October 4, 1917, with “On the Level” with Fannie Ward. It was built by Nasser Bros. at a cost of $250,000, who also operated its ‘sister’ theater, the New Mission Theatre (q.v.). The two theaters were quite similar in size, as well as from an architectural standpoint, often shared the same newspaper ads, and even offered the same second-run film attractions to their respective neighborhoods. Like the New Mission Theatre, the New Fillmore Theatre was remodeled in 1932 by Timothy Pflueger in Art Deco style.

By the mid-1950’s the impact of television as well as the deterioration of the surrounding neighborhood brought about the demise of the New Fillmore Theatre. It closed in May 1957.

After standing vacant for many years, it was finally torn down to make way for the neighborhood redevelopment program.

You may see pictures of the New Fillmore Theatre that were taken in 1943 here: View link

These pictures are part of the San Francisco Library on-line archives. This was a stunning theatre. My father Don Leon and his Petite Orchestra played there between the late 1920’s and early 1930’s. You may view his Showbill here: http://lotsofsites.com/gen/showbill.shtml

I thought that the New Fillmore was still there I guess i was mistaken, when you turned off Divisadero onto Fillmore there was a church on the right side a few blocks up that was a theatre. I went inside once during the late 70’s and it was beautiful inside. Unfortunately I don’t remember the interior (usually i’m good at that). If it wasn’t the New Fillmore then what was it?

Not sure about the theater, Robert Gippy, but Divisadero and Fillmore run several blocks parallel to each other and never connect with each other at any time along their lengths.

Thanks so much! Leslie

The Moving Picture World article Tinseltoes linked to says that this house was the second New Fillmore Theatre. The first was an 800-seat that had been built on the lot next door and opened in early 1915. The lobby of the original theater had been incorporated into the lobby of the new house, and the old auditorium had been converted into a room with a dance floor for private parties, though it was still equipped for showing movies as well.

As the 1915 house had also been called the New Fillmore, it suggests that there was an even earlier Fillmore Theatre for it to be Newer than, but so far I’ve been unable to track down anything about it.

The July 15, 1916, issue of The Moving Picture World had an article about San Francisco’s movie theaters which included a paragraph about the 1915 New Fillmore and a nearby house called the Progress Theatre:

“Kahn & Greenfield have a splendid foothold in the Fillmore district with the New Fillmore and Progress theaters located within a block of each other. The former is one of the finest houses in the city and was opened a little more than a year ago. It has a seating capacity of 1,000 and features the Paramount program at ten cents. Joseph E. Levin is manager. The Progress theater nearby was recently remodeled and the price of admission raised to ten cents, Triangle and Metro services being used. It seats 800. For a time Kahn & Greenfield also had two other houses in this district, but disposed of these in order to give more attention to the two largest ones.”

I don’t think the Progress is listed at Cinema Treasures yet. Several other Fillmore area houses mentioned in the article (scan at Google Books) aren’t listed yet either.