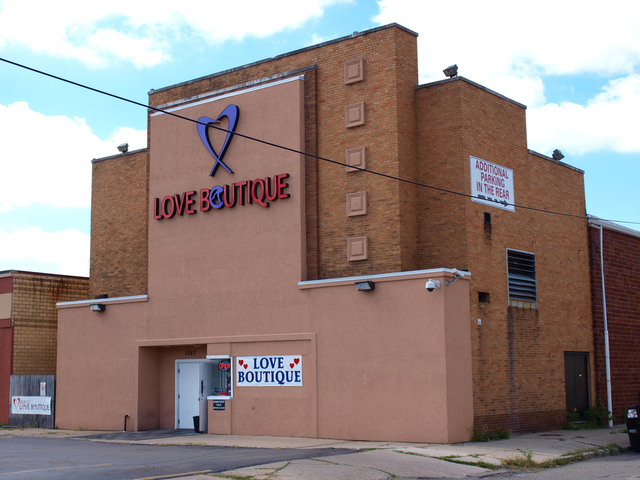 Originally opened July 10, 1941 with Joan Crawford in “A Woman’s Face”. This was the Roadshow house for some of the biggest 70mm films of the 1960’s. It boasted two Norelco 35/70 projectors. An exhibitor named Hunt took this single screen neighbor theatre in the McCook Shopping Center and transformed it into the showplace of its time. He installed a wall to wall screen in front of the old mini stage, with a deep curved screen and a sweeping blue curtain that ran beyond the the exits on each side of the auditorium. From “Around the World in Eighty Days” to “Ryan’s Daughter”, this theatre featured “Doctor Zhivago”, “Lawrence of Arabia”, “Gone With the Wind” plus many more.

Mr. Hunt had also operated the Hunt’s Cinestage in Columbus. When Mr. Hunt passed away, the theatres were operated by his wife, daughter and son-in-law. The Cinestage closed in 1972, and in 1974, the theatre was leased to the Levin Service company of Dayton where it began to run sub run movies for a dollar, but only lasted a couple of years. Since the late-1970’s it went over to screening X-Rated adult movies, but more recently these ceased and it has became an adult book store. It was demolished in 2013.

Dayton properties to be demolished for new development

A Lexington-based real estate firm plans to demolish two properties along Keowee Street as part of a larger redevelopment plan.

Garrett Day has acquired several similar vacant properties in the city within the past year to demolish and redevelop, including the former Dayton Executive Inn at 2401 Needmore Road, the former Rita Construction site at 824 Leo St., and a former industrial site at 1801 Home Ave.

Heitz has said he believes systematic redevelopment of area brownfields — commercial properties kept from redevelopment because of potential contaminants — is the key to Dayton’s recovery and a good long-term investment for his company.

“We want to be in a good planning position when people start building again,” Heitz said.

With the McCook gone, the only theatre standing that I worked at in Dayton is the former Loews Ames on North Main Street next to the Northtown Shopping Center. I worked at 6 locations.

The McCook Theatre should be listed as ‘demolished’.

The McCook demise is Levin services fault since allowing the X rated movies.

This was one of the finest RoadShow theatres in the area. It was a victim of the times when those theatres failed and died as single screen location. It did not deserve to finish its years as and adult store.

Herman Hunt was the exhibitor who ran Hunts McCook and Hunts Cinestage in Columbus, Ohio.

Levin Services took over operation in 1974 and they programmed the theatre with second run discount. The theatre was operating first run all of 1972 playing such movies as CABARET, FILLMORE and THE OTHER. I worked for most of 1972 there as projectionist.

This opened on July 10th, 1941. Grand opening ad in the photo section.