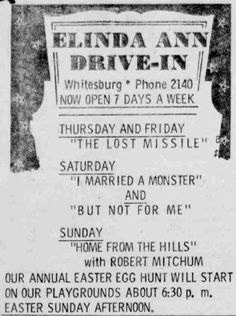 The Elinda-Ann Drive-In was opened prior to 1955 when it was operated by William W. Wright. It had a capacity for 300 cars and there was a covered seating area for walk-in patrons which had 360 seats. Now Letcher County Recreational Center and Diary Queen.