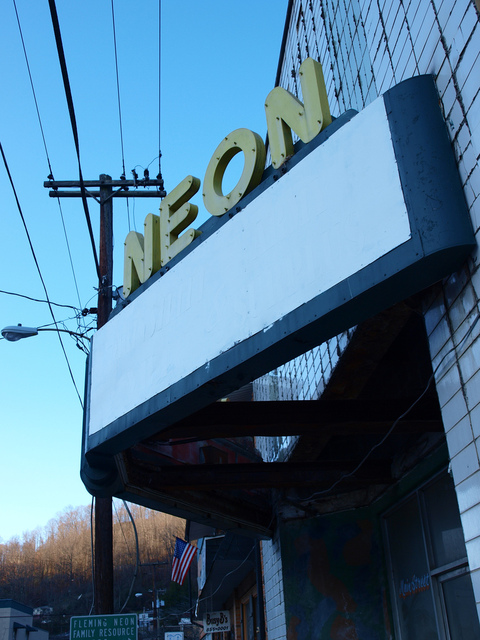 The former Neon Theater is now home to a video store as well as an army surplus store. An August 2007 photo can be seen below.

I couldn’t tell you what the website is now. Most likely if you google the theater and the city the page will come up.

I’ve done that quite a few times when there is a photo of the theater to go along with the new addition. The “related websites” criteria is not too demanding.

A theater doesn’t get added to the database without going through the webmasters, so if they include the picture link as an official website they must approve of the practice.

There was a Neon Theatre at Neon, Kentucky, as far back as 1925, when it was listed in the July 11 issue of The Reel Journal. Later, there was a Bentley Theatre, the town’s only movie house, which was reported to have been recently destroyed by fire in the March 11, 1944, issue of Boxoffice. The Bentley might have been the first Neon Theatre renamed.

The Bentley was apparently rebuilt, as it was mentioned in a July 2, 1949, Boxoffice item which said that its operators, the Virginia Amusement Company, were building a second theater in Neon. The Bentley would show only westerns and second run movies when the new theater opened. Judging from the look of the building in the photos above, the new theater was probably the Neon.

No, that wasn’t the site. Thst photo may be on a couple of different pages.

You can give them credit, but you would be guessing. I think Francis of Assisi would have stuck in my mind. If guessing is OK, feel free.

Nice Neon in the NEON Marquee.

From the looks of things “in person”, I’d say the Neon is doomed.