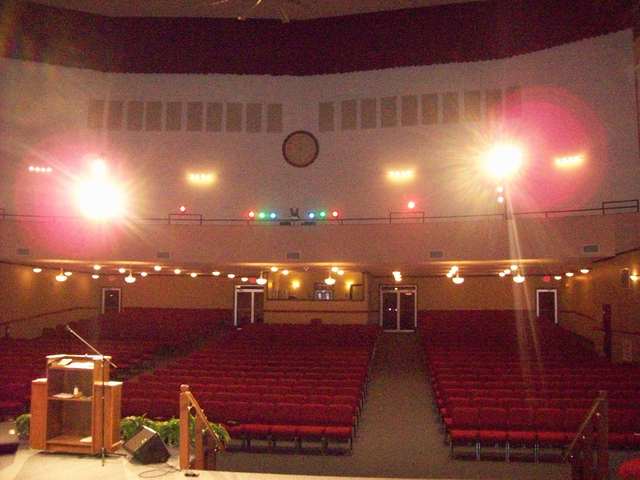 The Milford Theatre was built on the site of the Plaza Theatre which was gutted by fire. The Milford Theatre was opened by Schine Circuit Inc. on June 4, 1948 with Red Skelton in “The Fuller Brush Man”. It was an ornate palace, yet had an intimate feel with its 1,675 seats located in orchestra and balcony levels. It closed in the early-1970’s.

It has served as a church for over 30 years.

The church website has some interior and exterior photos of the Milford. Click on the photo gallery. No address, however. Perhaps Pastor Shockley can give us the physical address so we can update the caption.
http://tinyurl.com/29to89

I went through Milford recently and took a photo of the exterior, which I posted on Panoramio. I’m afraid there has been some significant alteration in the facade.

A paint job and window replacement…..I hate to see nice brick painted over…In a couple of years it will look like crap.

The rededication of Schine’s Milford Theatre occurred Saturday, June 6 as Jesus Love Temple. It was with great trepidation and a rapidly beating heart that I entered the theatre/temple to see what renovations had been made to what was my “second home” as a kid of the 50s. It took me about ten minutes to calm down as I rapidly scanned the auditorium looking for the architectural design features that characterized this remarkable theater during its heyday. Much to my surprise, Reverend Shockley and his architect were fairly true to the Ebersons' original scheme. The stage has been greatly modified with a new proscenium curtain replacing the unique and beautiful design of the original. All seats were removed and replaced with a very plush stackable type chair. Carpeting throughout the interior has been replaced. The 500 seat balcony has been sealed off. Everything has been painted a brighter color. Some of the plaster trim that adorned the walls in a running stripe has been removed and replaced with a painted version. Two backlighted bird sculptures on each sidewall have been restored, with brighter lighting. A wall has been erected to seal the seating area from the inner lobby. You must now enter the auditorium through the glass doors. The doors leading from the outer lobby to the inner lobby have been removed. The original tile and marble finish of the outer lobby are intact. So is the tile on the walls of the men’s room!

Kudos to those who had a hand in renovating this marvelous facility. Although it will never be used again strictly for its originally intended purpose as a movie theatre, at least it did not face the wrecker’s ball.

But Schine’s Milford Theatre was far more than a movie house, it was a focal point of the community, a place for social gathering. Many a lad strategically manipulated his arm around the shoulders of his first date or stole his first kiss in the darkness of the Schine’s Milford. For years every high school senior walked the length of the stage to receive his diploma, civic groups presented local talent shows as fund-raising events and the local dairy for many years sponsored the annual “Back-to-School” Saturday morning cartoon festival. I was privileged to have had a hand in staging some events on the stage myself.

It has always been disconcerting to me that the movie-going era of the single screen theatre ended. It was a magnificent time. Here’s a tip of the hat to Ray Sparkin who managed Schine’s Milford Theatre in the late 50s, early 60s. He was quite a guy who gave me many opportunities. An equally big salute to Jack Nock who served as projectionist until the theatre closed. What a perfectionist. He was the best. May both rest in peace.

Although now used as a church, this theate could possibly be used as live theater as well or for professional and community theater events. A lively and philanthropic venture perhaps one day could co-exist in this amazing space. “This is the day … !”

Two photos of Schine’s Milford Theatre illustrate this advertisement for Heywood-Wakefield seating in the September 17, 1949, issue of Showmen’s Trade Review.

The last film screened at the Milford Theatre was
“Straw Dogs” with Dustin Hoffman in 1972.

The Milford Theatre launched June 24th, 1948 with “The Fuller Brush Man” and short subjects including “Bugs Bunny Rides Again” and the Vitaphone Melody Master, “"Rubinoff and His Violin.”