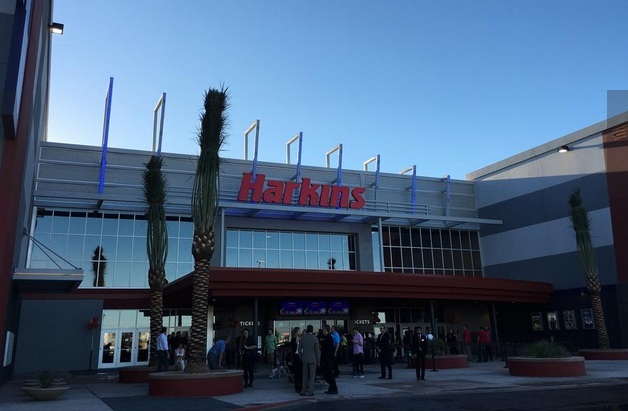 The Estrella Falls 16 opened October 13, 2016, highlighted by a 400-seat Ciné 1 auditorium with an 80-foot screen and Harkins own Ultimate Lounger recliners. Technical amenities include a 150,000-watt Dolby Atmos object-based 3D sound and a state-of-the-art laser projectors.

Harkins Theatres now has 33 locations in Arizona, California, Colorado, Oklahoma, and Texas so here is a short history: A remembrance of Dwight “Red” Harkins, who passed on April 24, 1974, was published in the Scottsdale Daily Progress. Red opened the State Theatre in Tempe in 1933 and ran it until 1940 and partnered with Harry Nace Sr. in a few theaters in the 1940’s.

At the time of Red’s passing he operated the theaters at Tower Plaza, Los Arcos, Shea Plaza, Glenfair, Camelview, and the Continental in Phoenix. He was referred to as “Mr. Multiplex” by the FCC, not because of his theaters but by his pioneering ventures in FM broadcasting.

Dwight’s son, Dan, has run the chain since 1974 and has grown the chain considerably.