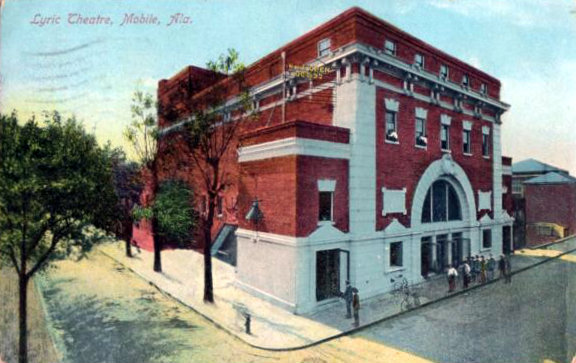 The Lyric Theatre opened on October 22, 1906, seating for 1,200, as a vaudeville house. The theater was designed by the Stone Brothers. It also presented live stage shows, and occasional movies. The Lyric Theatre contained two balconies and two sets of boxes, a large, ornately decorated proscenium, and a fire curtain decorated with scenes of Mobile’s Bienville Square. It was also said to have wonderful accoustics.

Many famous names played the Lyric Theatre during its vaudeville days, including Richard Strauss, Sarah Bernhardt, Burns & Allen, W.C. Fields and in 1913, President Woodrow Wilson spoke to members of the Latin-American Congress at the Lyric Theatre.

After the Lyric Theatre closed in 1950, it was demolished to make way for a parking lot.

This theatre is mentioned in a book about Nelle Harper Lee (To Kill A Mockingbird) by Charles Shields.

The February, 1906, issue of Engineering World ran this announcement about the proposed Lyric Theatre in Mobile:

The Sanger Amusements web site offers this page with a brief history of the Lyric, and several illustrations.

I remember seeing the beautiful Lyric Theater just around the corner from the slightly larger Saenger Theater. It was beautiful and contained a lot of Italian Marble. It had a larger performing arts stage. It was sadly destroy to open up that block to a park. The theater should have been saved – it was a gem in the South and actually a much better theater for acoustics than the Saenger. Where was the public outcry especially since in the 60s it was considered one of the finest in North America. We have a real problem in the USA in discarding our heritage.