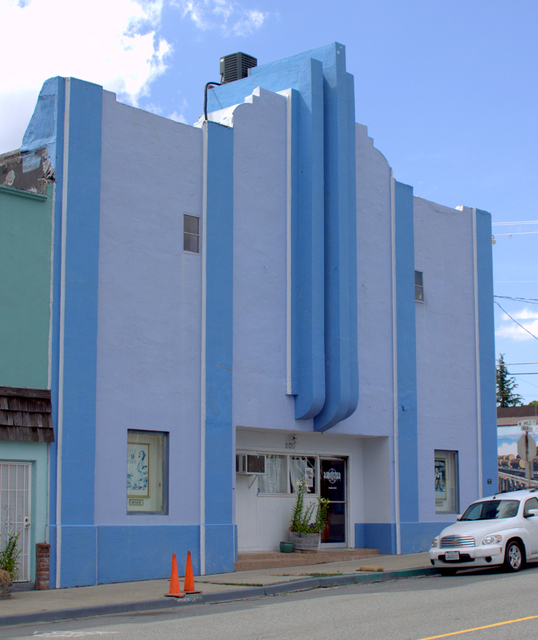 The Art Deco style New Weed Theater replaced an earlier theater that was originally built in the 1920’s to serve the town of Weed, current population 2,978. It was destroyed by a fire following an explosion.

This New Weed Theatre was opened around 1933. From 2001 it became home to Sylvia Massy Shivy’s Radio Star Studios, which offers a “unique recording experience for performing musicians”.

Sylvia had created a fully functioning live music venue and studio from the old Palace Theater and recorded and mixed songs for such artists as Tom Petty, R.E.M., and Johnny Cash. It closed in 2012.

Hopefully you can weed out all this information. Keep us posted.

Somebody will smoke it out eventually.

I bet they sell a lot of popcorn there!!!

Oh by the way do they have a smoking section?

I was going to see a movie there,but I forgot.

Poor little Weed. It isn’t even in Humboldt County!

Thanks JuliaG.Have a great night.

In October 2014 the Weed Palace looked clean from the outside but apparently deserted inside. Wikipedia says Sylvia Massey, former proprietor of the famous Radio Star Studios closed down her operation there in 2012. A massive wildfire which devastated much of residential Weed in September 2014 reportedly narrowly missed the Weed Palace and rest of downtown Weed.

Good to see the old Palace Theater again. I was manager there from ‘88 through about '91 working for Steve Naify. I graffitied in the space under the right stairway going up to the balcony. I hope it’s still there. I still remember the first film I ran while there. “Mississippi Burning”. I lived in the attic for a while. If I remember the history correctly, the original theater burned down sometime, I believe, in the thirties or forties. All that was left was the outside walls. The marquee fell in a windstorm sometime in the late forties and was never replaced.

Thanks for the tip about the fire, kevinfglover. I found a report about a fire at the New Weed Theatre the August 25, 1932, edition of the Medford Mail Tribune of Medford, Oregon. The item said that the house, which had been in operation only nine months, had been destroyed by a fire following an explosion early the previous morning. Walter B. Leverette, of the Cordilleran Theatre Circuit, owners of the house, said that the theater would be rebuilt with concrete construction. The burned house had been in a wood framed building.

This was probably operated by Robert Lippert later, before being taken over by the Naify family. In 1947, Lippert bought the Leverette Interstate Theatres, a nine-house chain. I don’t know for certain if the New Weed was still under Leverette’s control at that time, but it most likely was, as it had been part of his chain at least as late as March, 1945.

The news that the New Weed had been in operation nine months when destroyed by the 1932 fire means that it might not have been the original Weed Theatre that had operated in the 1920s. While it’s possible that the original house had merely been closed for a time and then renovated and reopened by Leverette in late 1931, but it could also have been in a different building. Either way, the original Weed Theatre was not in this building, newly constructed in (probably) 1932 or 1933 after the fire.