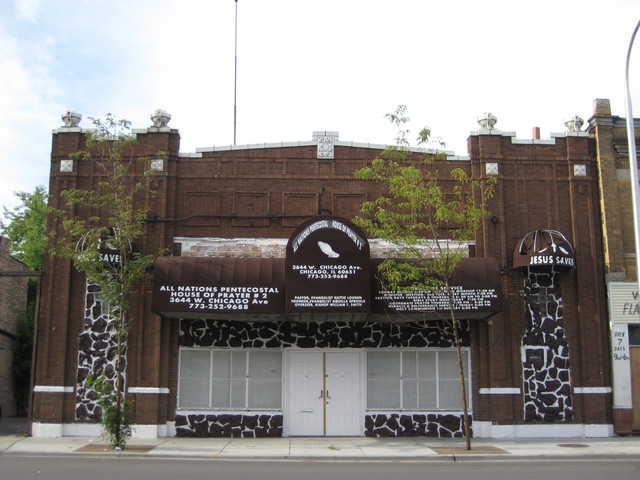 The Famous Theatre opened in 1916 for the Lynch circuit, and was located on W. Chicago Avenue near N. Monticello Avenue, in the Humboldt Park neighborhood. It closed as a movie house sometime in the 1950’s. Today, the building houses a church, the All Nation Pentecostal House of Prayer.

My memory of this theater in the early 50s is that it was kind of shabby, cheaply built! Nowhere near as nice as the alamo. My older brother said that a rat ran across his foot while wathing a movie there.
That same brother got several organ pipes from the small organ that was in the theater when it was being demolished and would stick them in the tailpipes of cars to hear them whistle.

Here is an undated photo:
http://tinyurl.com/3xpgva

When I was a boy I was in the Cub Scouts. I seem to recall that we had our monthly “pack” meetings in what was then, a VFW hall called the “Alamo Post” or later the “Pat Petrone Post”. It was located directly accross the street from the Alamo theater. I think this is the building. This would have been aproximately 1956-1958.

A shame this excellent site is dieing like the people that attended the now closed shows as kids back then. very little activity anymore.

A few years ago…….. I was able to look at the closed and demolished theaters in IL. on this site. Can someone please tell me how to get back to that site again? Thanks,

JAYJay: Above the theater name near the top of this page click on “Illinois”; When the subsequent page opens, go just below the map and click on “Demolished”.