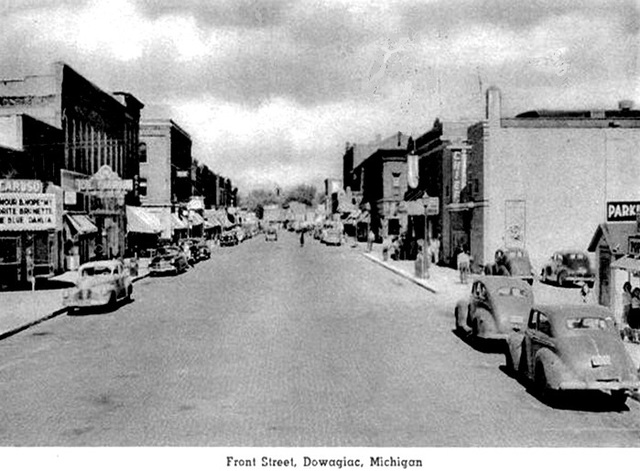 The Dowagiac Theatre was gutted by a $100,000 fire on November 22, 1977. The News-Palladium, which published a photo of the fire, noted that it was constructed in the mid-1940’s after being destroyed by fire during World War II.

Sanborn Maps show a theatre was built at this location between 1931 and 1933, nearly across the street from the Century Theatre.

According to Motion Picture Herald, August 14, 1946, Paul Caruso had opened the 400-seat Caruso Theater featuring a crying room. In 1963 it was still called the Caruso Theatre. In 1971 it was operated by Donald White, who opened the new Southtown Twin in St. Joseph in July. On November 23, 1977 the Dowagiac Theatre was gutted by a fire.

The old postcard of Front Street shows the Caruso Theatre marquee with Lamour & Hope in “My Favorite Brunette” (1947) and the “The Blue Dahlia” (1946).

It looks like the Dowagiac Theatre’s building is still standing, occupied by the offices of an outfit called LPL Financial, a business services and financial planning company, but the facade has been refinished with new brick.

Comments on the Caruso Theatre page at Water Winter Wonderland indicate that, though the theater never reopened after the 1977 fire, the marquee remained in place until 2004. Another comment says that Paul Caruso sold the theater in 1965.

My father had the theater and the building at 212 Front, which housed the local Sears store and professional medical businesses, erected on a vacant lot. No fire destroyed any theater there during WW2.

We have a conflict between the Sanborn maps cited in Ron Pierce’s description of this theater and the Film Daily Yearbook, which lists no theaters at Dowagiac between 1926 and 1947 other than the Century and the Beckwith (which was at Front and Beeson Street.) Both the Caruso and the Chief were opened in 1946.

Khnemu’s recent submission of the Chief says that it was in operation prior to 1931. If so, it never got listed in the FDY, and the Chief at 205 S. Front was definitely opened (and apparently newly built) in 1946. If the Sanborn maps show a movie house at the Caruso’s location in 1931 and 1933, perhaps it was the earlier Chief, and it had such a brief life that the FDY never found out about it.

Despite the claim in the 1977 News-Palladium article, I believe MJCaruso is correct in saying that no theater in Dowagiac was destroyed by a fire during WWII. The only theater fire in Dowagiac prior to 1977 that my own research has turned up was at a nickelodeon in 1908.