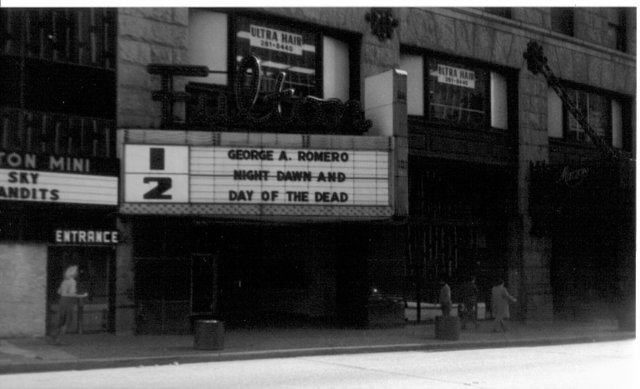 Originally built in 1903 as the Gayety Theatre, it opened on Halloween night, October 31, 1904 with Harry Houdini performing and a seating capacity for 2,000. It ran for many years as one of the country’s foremost stage and vaudeville houses, with appearances from such stars as Ethel Barrymore, Gertrude Lawrence and Helen Hayes.

In the entry vestibule, note the original mosaic tile floor and the many bare light bulbs lining the ceiling, evidence of the advent of electrical lighting.

Backstage, the theatre was one of the remaining few to use sandbags and hemp ropes to work the scenery rigging until 1999 when a modern rigging system was installed.

In 1930 the theatre was renamed the Fulton Theatre and become a full time motion picture theatre with 1,800 seats. The Pittsburgh Cultural Trust puchased the theatre in 1990 and following the first of four planned phases of renovation, the Fulton Theatre was reopened in May 1991. It was later renamed the Byham Theatre through a naming right from the Byham family following the second phase of renovation in 1995 when the theatre reopened.

The old lighted Fulton Theatre marquee has been restored by the State Museum of Pennsylvania in Harrisburg and will be installed there as part of a theatre exhibit.

The second phase of rennovations brought new restrooms, box office, marquee, an elevator, lobby improvements and facade changes. In 1997, the Cherub Lobby was restored to its original splendor.

The third phase of renovation in 1999 updated the theatre rigging system, enlarged the orchestra pit and provided new HVAC for the entire building. Excavation under the stage and seating area will provide space for future dressing rooms.

The Pittsburgh Cultural Trust continues to address the needs of the Byham Theatre. These types of renovations are driven by the contributions of its attentive supporters, and with ongoing support the Cultural District will continue to improve and develop.

I did some fill-in work here, when I wasn’t working at the Warner or the Chatham. I remember seeing “Star Trek – The Motion Picture” here in 1979. I understand that movie was originally supposed to play at the Warner. However at the time Star Trek – TMP was released (December 7, 1979), the Warner was still doing good business with “Apocalypse Now” and they didn’t want to change features yet. The Warner ended up getting “The Black Hole” on December 21st for its 1979 Christmas release.

Grand opening ad as Fulton from October 1st, 1930 can be found in the photo section.

Was the premiere of Romero’s 1978 Dawn of the Dead held at this theater or the nearby Gateway? I attended the screening but fail to remember which venue it was in.

Jeffrey, Dawn of the Dead opened in April ‘78 at the Gateway Theatre.

Jeffrey, My mistake, that would be April 1979 for Dawn of the Dead at the Gateway

50th anniversary of the 10/01/68 premiere of “Night Of The Living Dead” at the Fulton Theatre. Full width version of the previously posted photo added via Tumbler.

50 years ago tonight, I was sole usher working the balcony at the World Premiere of Night of the Living Dead at the Fulton Theatre. I was 17 years old at the time. I am now. I will do my best to locate the photo of me taken back in 2014 standing in a replica of my ushers outfit, standing in the exact same spot I did back on October 1, 1968.

You will find the photo of me (mentioned in the above posting) duplicating my usher’s stance on the evening of 10/1/68 at the world premier of Night of the Living Dead at the (then) Fulton Theatre. It is in the photos section of of the Byham Theatre.

Thank you for pointing your photos out. Very cool.