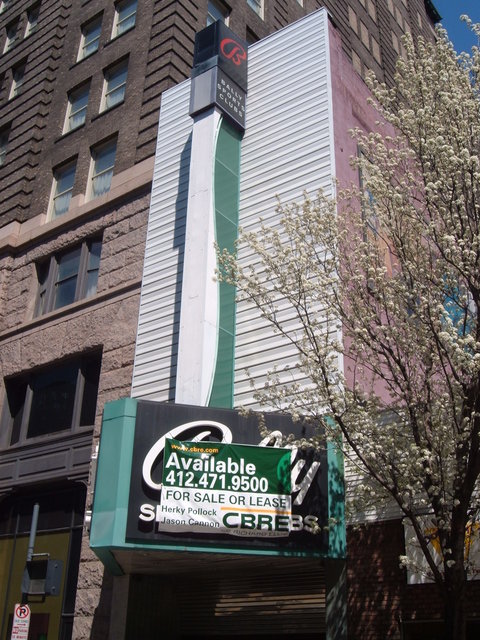 The Gateway Theatre was located in downtown Pittsburgh in what is now the city’s Cultural District. It was built on the site of the Alvin Theatre which opened September 21, 1891, and closed in 1933. Architect Edward B. Lee was employed to revamp the theatre which reopened August 30, 1934 with Shirly Temple in “Baby Take a Bow” & Harold Lloyd in “The Cats Paw”. It had a major roof collapse on November 14, 1940. It was rebuilt to the plans of architect John Eberson and reopened April 4, 1942 as the J. P. Harris Theatre, named after John P. Harris, who started the world’s first nickelodeon in Pittsburgh.

On December 30, 1960 the theatre was bought by George and Ernest Stern, whose Associated Theaters chain also included the Fulton Theatre, which was several doors away at 101 6th Street. They renamed the theatre the Gateway Theatre. It underwent a remodeling in the Autumn of 1967 and was dark for several weeks.

On June 11, 1980 the Gateway Theatre closed with “Friday the 13th”. The theatre was remodeled into a health club called the City Club. The club was bought in 1999-2000 by the health club chain Bally’s, and it still operates as that today. But the front of the club is easily identifiable as a former movie theatre.

I can remember seeing a “sneak preview” of “The Time Machine,” in 1960, at what was then called the J.P.Harris Theatre, along with the main scheduled feature, “Let’s Make Love,” which starred Marilyn Monroe, and which I thought was too dull for words. I was 11. But I loved “Time Machine” and still do! I seem to remember other films there, too, like “Journey to the Center of the Earth,” and “The Mysterious Island,” which usually appeared around the holidays.

I can remember seeing a “sneak preview” of “The Time Machine,” in 1960, at what was then called the J.P.Harris Theatre, along with the main scheduled feature, “Let’s Make Love,” which starred Marilyn Monroe, and which I thought was too dull for words. I was 11. But I loved “Time Machine” and still do! I seem to remember other films there, too, like “Journey to the Center of the Earth,” and “The Mysterious Island,” which usually appeared around the holidays.

“An advertisement for Philadelphia building contractors R.C. Ballinger & Co. in a 1907 edition of Sweet’s Catalog of Building Construction listed the Alvin Theatre among the projects the company had built, and said that the house was designed by an Indianapolis architectural firm called Reed Brothers. I’ve been unable to find any other references to that firm on the Internet.”

I don’t know why I didn’t think of this before, but “Reed Brothers” might have been an error by whoever put together the ad in Sweet’s Catalog. Before establishing their practice in San Francisco, that city’s noted theater architects James and Merritt Reid had operated an office in Evansville, Indiana, along with their younger brother Watson Reid. The Evansville office was sold in 1891, the same year the Alvin Theatre was built. The Reids then moved to California, though Watson eventually returned to their native Canada to practice architecture there.

This is probably not enough information to establish that San Francisco’s Reid Brothers designed the Alvin Theatre, but, if the Sweet’s ad got both the name and the city wrong, it opens the tantalizing possibility that they did. It would be interesting if their first theater design turned out to have been in Pittsburgh, and not in that other hill town where they became famous.

Grand opening as the Alvin Theatre was September 21, 1891 (ad in photos). It closed as the Gateway Theatre after a last showing of “Friday the 13th” on June 11, 1980. It’s final booking, “The Island” was moved to the Manor Theater.

A parade of cars traveling Sixth Street in Downtown Pittsburgh with signs bearing “Eisenhower-Man of the Hour” and “Tell Your Missus Don’t Vote for Hisses” supporting him in the 1952 Presidential Election. This view also includes the Fulton and Harris Theatres.

SHAME ON THE CITY OF PITTSBURGH. Shame on them for allowing this beautiful theatre to go by the waste side. It should have been preserved and made into a live concert venue. The city is poorer for having destroyed it.

1931 photo as the Alvin added courtesy The Odd, Mysterious & Fascinating History of Pittsburgh Facebook page. Unique 40th Anniversary marquee added above the existing one. I calculated the year based on the 1891 opening. 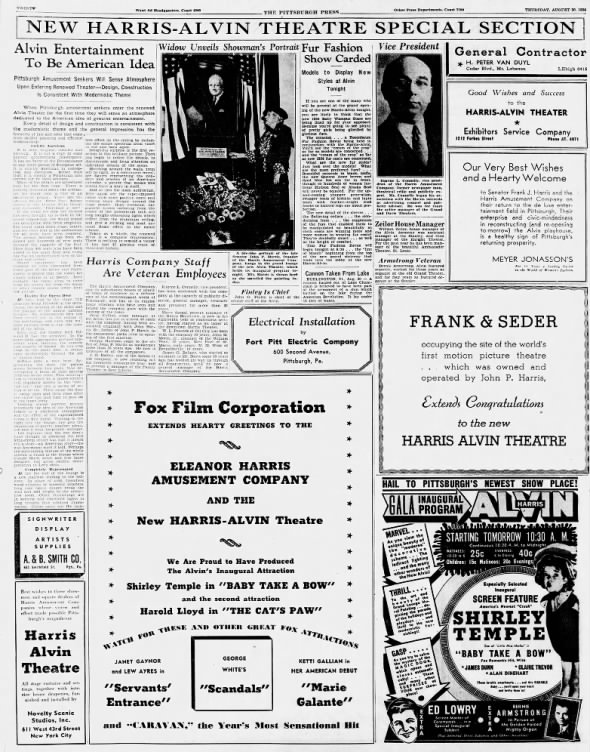