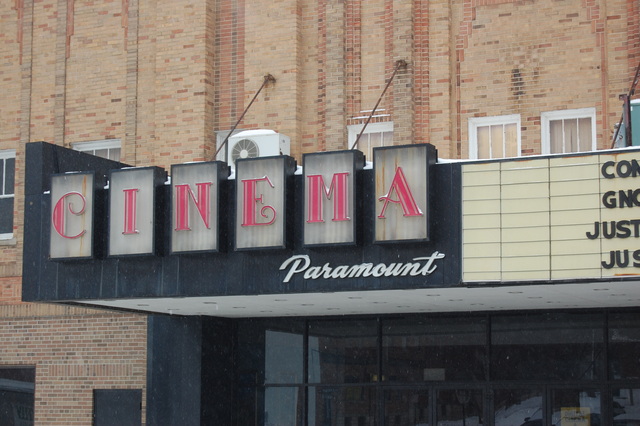 The Paramount Theatre was opened November 14, 1931. I remember the Paramount Theatre being a single screen up to November 26, 1986 when a second screen was added. Sometime in the 1990’s, it was changed to a multiplex. Three more screens were added. The main auditorium is split into three screens. The big screen is the biggest partition with two smaller partitions with smaller screens. The fourth screen is a converted beauty parlor that was located adjacent to the cinema.

The fourth screen is a joke. It is about as big as your average big screen TV. It has maybe four rows of seats. It is best avoided.

The two smaller screens of the main auditorium is OK. They still use an old sound system which sounded lousy 10 years ago. The sound system bleeds into the adjacent screens.

The large screen is the best. It has the best system. It had to be upgraded in order for the cinema to show “Star Wars I: Phantom Menace”. It some what resembles the days old since it still has the high ceiling with Art Deco work. It still has many rows of seats for that old time feel, some what.

Since I am from a small town, I can only guess that Fremont’s Paramount Cinema was built late in the hey day of the movie palaces, maybe, in the late-1930’s. After all, Fremont is 40 miles from Toledo, Ohio which had at least six or seven movie palaces downtown during the time period.

I got an extensive tour of the the Paramount on May 14, 2004. Later that evening I returned and saw the movie “Troy” in the main auditorium. The loveseats, huge screen, and mostly original auditorium all combined to make it an enjoyable movie experience. “Troy” was pretty good too. I noticed no sound from the other screening rooms so perhaps they’ve corrected this problem.
If you plan to visit the Paramount and also take in a movie, do definitely choose the movie in the main auditorium. I was told at another theater by an employee that the projector for the Paramount’s store front auditorium is actually not in that auditorium. It seems there wasn’t enough room in this tiny space for the forty seats and the projector. Memory tells me it is the ceiling and projected onto the screen with the assistance of two mirrors.

Fremont Cinema is the largest in the state of Ohio. I don’t understand your comments above. How can you say such evil things? Are you anti-Fremont or something?

Whoever wrote that the 4th cinema is a joke is absolutely wrong. A 120 by 85 foot screen and FREE popcorn? Come on.

movierater123- you are absolutely incorrect on all your statements.My only comment to you is that you must be a child acting ridiculous and sarcastic to amuse yourself. I’ve lived in Ohio for 17 years and recently went to Paramount Cinema in Fremont Ohio. Everything they say i absolutely correct. Come on.

I remember seeing movies at the Paramount in 50’s and early 60’s. It was by far the nicest theatre outside of Toledo. Remember seeing"Wizard of Oz" in late fifties and being in awe over the film when it went from black&white to color.

Fortunately the main auditorium still retains most of its original character.It’s unfortunate that they had to carve things up a bit to make room for their multiplex.

For history buffs: Do you remember the other movie theatre in town? It was located also on Front St. in the adjacent block to the north. I believe it was named the “Strand” but it didn’t compare to the Paramount in stature.

The Paramount has gone through some serious improvements over the years. Since the Armstrong Circuit/Sweeney Family ran the movie house, it lost most of it lack luster. Tilton and Associates bought the theatre in the mid 80’s and began a restoration and began upgrading the theatre. The first was to make this theatre a multi-plex to offer the residents of fremont and the surrounding area a better movie experience. The two stores that leased space were closed, and torn out and blocks were put in its place to make way for a handicapped accessable ramp and a “screening room” having about 40 seats (usually housing the final run movie. the main theatre was cut in half making way to twin the balcony section. Also moving the concession stand from in the center of the lobby to the right side offering more choices than just popcorn, pop, and candy, this makes waiting to buy tickets better than standing outside. As of the the late 90’s, the Great Eastern Theatre Chain who took over the theatre after the death of Mr. Tilton, has upgraded the sound systems in all of the auditoriums, providing digital sounds,Screen 1 has Sony digital sound (The top of the line in digital sound) while screen 2-3-4 have DTS (still considered HI TECH in the motion picture industry), placing stadium seating in the entire theatre. Sometimes, yes you might hear sound coming through the “wall” but you only hear this when someone opens a door to the auditorium. They also owned the small house that between the Theatre and the Municipal Building to make a larger parking area for patrons.