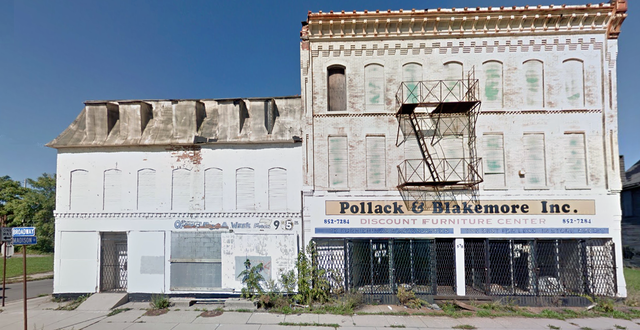 The East Side had a silent-era neighborhood theatre, the Sun Theatre, at the corner of Broadway at Madison Streeet, vopening in September 1914 and closed in early-1916. In early-1921 it briefly reopened as the Lyric Theatre. The theatre was reopened by Robert B. Joplin on September 24, 1921 as the McAvoy Theatre, billed as Buffalo’s first African American movie cinema, it also presented variety on its stage. The theatre had an all African-American staff and silent African American films including, “Pretoria II”, “A Man’s Duty” and “The Birth of a Race”, the latter of which was said to be the first race feature film shown in its entirety.

As of 2016, the theatre building appeared to be standing but possibly vacant.

The 1,000 seat theater opened in September of 1914. It closed early in 1916 reopening in 1917. After closing, it had a brief relaunch early in 1921 as the Lyric Theatre. After closing that same year it was reopened by Robert B. Joplin on September 24, 1921 as the McAvoy Theatre. One mile east is a historical marker for the Michigan Avenue Heritage Corridor entitled, “Moving North” that commemorates the McAvoy Theatre’s existence.