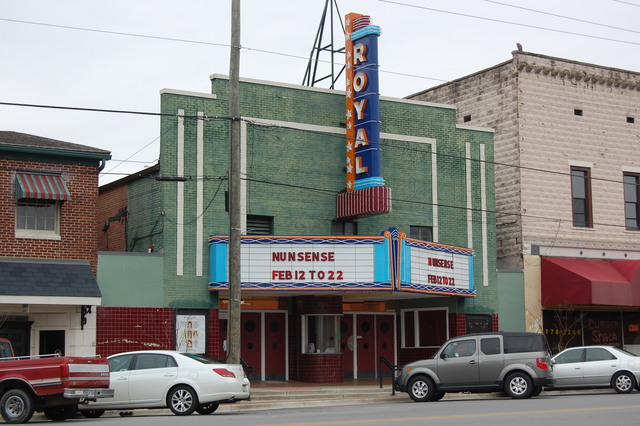 This downtown theater has been in constant operation since the 1920’s. It opened as the Imp Theatre, on Market Street. In the 1950’s, the owners acquired the neon sign from the Royal Theatre in Little Rock and remodeled the entrance.

In the 1990’s the family owned building was sold to Jerry Van Dyke (Dick’s brother and Luther on ‘Coach’). Jerry opened a soda shop next door and operated the theater as a joint movie house/live venue. When Jerry moved to Mexico, he gave the theater to a local community theater, who assumed the name the Royal Players.

The Royal Theatre no longer shows films as the screens were removed and projectors sold before the transfer to its current owners. The Royal Players have completed several projects to preserve the theater. Most of the original fixtures are still in place and an old doorless safe labeled ‘Imp’ is in the upstairs office.

An interesting note, the Royal Theatre was originally one screen with a balcony. At some point in time the balcony was enclosed and small screen installed. The original projection booth was used to show films there and a second booth was constructed downstairs for the big screen.

Cheryl Nichols, a private contractor in historic preservation, prepared the nomination for the Royal Players. Assisting her with her research for the nomination presentation was Shannon Moss, a Royal Players board member, who was an employee of the Royal Theatre for many years; and Steve Perdue, curator of the Arkansas Room at the Saline County Public Library.

“Cheryl made the presentation to the board,” Webb said. “The board members were pleased to see the relationship between the Royal and the Center Theater in Little Rock. The same architects designed both theaters.”

The State Review Board is comprised of “about a dozen people, made up of historic preservationists from around the state,” Webb said.

In Nichols' presentation, she noted that Alice Wooten was the original owner of the IMP Theatre (which later became the Royal) and sold it to Wallace Kauffman in 1922. Generations of the Kauffman family continued to own the Royal Theatre until 1996. Wallace and Lena Kauffman passed ownership to their son, Warren Lee Kauffman, and the last of the family to own it, Randy Kauffman, sold it to entertainer Jerry Van Dyke. Van Dyke gave the theater to the Royal Players less than three years ago.

The original section of the Royal Theatre was built in 1920 when it was known as the IMP, with IMP being an acronym for Independent Motion Pictures, Nichols' presentation noted.

The following summary about the theater’s history was considered by the board:

“Occupying one lot near the center of the west side of the 100 block of Market Street in downtown Benton, the Royal Theatre is a free-standing, two-story brick building with a partial basement. The theater was remodeled and enlarged in 1948-49 when the existing facade was created and a flat-roofed addition was built at the rear of the original 1920 gable-roofed section of the building.

“The remodeling was the work of the Little Rock architectural firm of Ginocchio and Cromwell, who incorporated into their design for the Royal some of the same materials they used in a contemporaneous project, the Center Theater in Little rock. The Royal Theatre’s most striking features – the neon-trimmed marquee and the vertical Royal sign – came from the theater in Little Rock that was remodeled as the Center Theater.”

Nichols explained that since 1949 the only major change to the exterior of the Royal Theatre has been a new color scheme: The buff brick and much of the maroon tile were painted dark green in the late 1990s. Otherwise, the facade is almost exactly as it was designed in the late 1940s.

The Royal Theatre’s main (east) facade originally derived much of its modern, streamlined look from bricks laid in patterns that created two vertical lines running up each side of the facade and traced a large square in the center of the facade, over the marquee, Nichols noted.

Movies were continued to be shown at the Royal until 2000. The lobby is largely unchanged since 1949, she noted, except for the addition in 1959 of a new concession stand. The original concession stand, which opens to the outside as well as into the lobby, still exists and is used as an office. The basic configuration of the theater auditorium in intact, although the balcony was enclosed in 1978 when it became the location of a second movie screen.

When Jerry Van Dyke bought the theater in 1996, he covered the walls in the main auditorium with velvet and installed newer seating. Original wall light fixtures are intact and the original decorative motifs are thought to remain on the walls under the velvet. The main auditorium also retains its 1949 acoustical tile ceiling and original seating is intact in the balcony.

The Royal was operated by Rowley United Theaters out of Dallas in the early sixties. This chain ran a large number of theaters in Arkansas, Texas and Oklahoma. Texas was the primary emphasis, it appears.

To follow up on ken mc, Rowley United Theatres became a wholly owned subsidiary of United Artists Theatre Circuit, Inc., and it was then known as the ‘Rowley United Division.“ He is correct, Rowley operated many theatres in Texas, but also had properties in Oklahoma and Arkansas. Rowley operated many theatres in Little Rock, plus what became know as "The Big 8,” which included theatre operations in Fort Smith, Clarksville, Morrilton, Conway, Benton, Malvern, Arkadelphia and Magnolia. Both Benton and Magnolia were “partnership towns.” United Artists owned 50% and Magnolia owned 50%. The Kauffman family in Benton (Warren Lee Kauffman was the last one to manage the theatre under this arrangement) and W.P. Florence of Magnolia were the “partners.” Clarence L. Hobbs was the District Manager for several years, and managed theatres in Morrilton and Conway before that. He was based out of Conway, prior to moving to Tulsa. I worked as a manager of the 65 Drive-In for Mr. Hobbs, the old Conway Theatre, and the UA Cinema 1 & 2 in Conway. I also was interim manager for the theatres in Morrilton for a short period, and ran the UA Cinema 1 & 2 in Arkadelphia for several years.

Question: Does anyone know what happened to Warren Lee Kauffman of Benton? Is he still alive? The other partner, W.P. Florence of Magnolia, died a few years back. Thanks, Richard Robinson

To answer R. Robinson’s question….Sadly Warren Lee passed away in 1999. He was my beloved grandfather! I miss him and the old days at the theatre more and more. I am the daughter of Randy Kauffman who also owned the theatre in its later years.

Here is another photo of the Royal:
http://tinyurl.com/nwws53

Greetings all, I see there haven’t been many comments left on this page in quite some time. I’d like to introduce myself. My name is Timothy A Samuelson. I am taking over as the Facilities Director at the Royal. This building has been important throughout my life and it is truly an honor to be contributing to its history and lineage by adding my mark. I would like to ask that anyone that has pictures or stories about this space please contact me via my email: . These past few weeks have been very hectic for our organization. We began the initial phases of the renovation and restoration of this magnificent space beginning with the upstairs office. I can confirm the stories that the safe is still in the room and is, in fact missing the door (I was really hoping to find it, but my hunt has yielded no fruit) On top of locating the safe, we uncovered the original wall paneling that had been hidden away behind layers of cover-ups. We also located the bell system that was used to page between downstairs and upstairs. I’m having a small display case for the bell made and it will be proudly displayed on the desk. The desk in the office is also the original desk. (signed and dated by the builder in 1919) All items uncovered including the carpet that was installed in the 1949 remodel will be kept in the closest condition to original as possible. As we complete the office in the next few days, we will begin to reach out into the rest of the upstairs space which has been closed to patrons for as long as I can remember. Our plans for the upstairs space are a small black-box theatre space that can be used for smaller performances, recitals, movies, lectures, and many more events. This upstairs will become the brain of our youth theatre program, the Young Players. My plans are to establish a sanctuary for the youth of the community to take place in after school programs geared towards education and the arts. Any help that anybody could offer us in this time of progress would be greatly appreciated as we would like to have all work on the building and a second space we are attempting to acquire complete for the 100th anniversaries of the spaces. If you would like to get involved in our project, whether it be in the form of donations or the contribution of a story, please feel free to contact me. My email again is . Thank you all