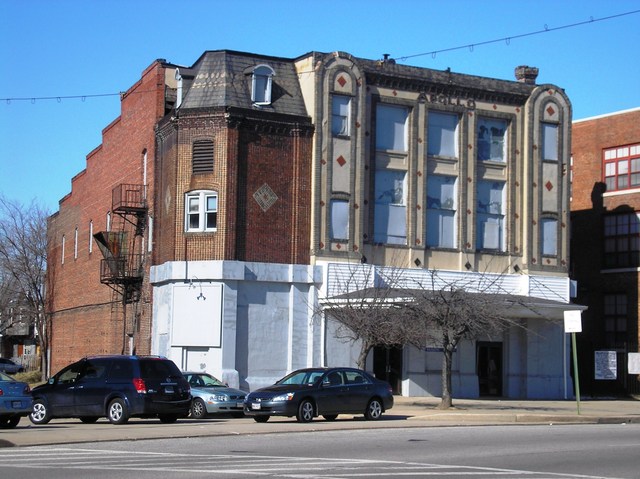 The Apollo Theatre was opened December 26, 1920. A look at the Apollo Theatre today, while the entire neighborhood around the theatre has changed over the years, with entire blocks being torn down for rebuilding, the Apollo Theatre has managed to survive, used for many years as a church. The front was at one time painted in an odd yellow, and along with a vacant firehouse, were the only two buildings left standing on the block.

The Apollo Theatre survived until 1981. You can still see the name Apollo just under the roof line on the facade of the old theatre. A weird twist; it’s next door to the building where Ouija boards used to be manufactured.

I was just up in Baltimore last weekend and had I not ben stopped at a traffic light I might have never even seen the Baltimore Apollo.

Right now I can’t tell you. Like I said I just happened to be driving by and stopped for a light. I only realized it was a theatre when I saw APOLLO just below the roof edge. It is not in the best of neighborhoods by far. If I happen to happen opon it again and have a few minutes I may look in to it.

It’s so nice to get my PC back on line. Something happened to my wireless connection. It showed I had signal and I was on line but the PC didn’t see it. Deleted the wireless card drivers and reloaded it and I was back but for 2 weeks I was in a panic. I was on a slow lap top and getting e-mail was a pain in the butt

Here is a google Map link. It also has Street View
View link

LOL Lost I was driving by in a tour bus not a car. I just have this uncanny nack of finding places like this. I think the google street views are less then 2 years old.

In its last days the Apollo’s projection system was notoriously out-of-kilter! On “flat” films the top of the picture was cut off – you could see it reflected on the ceiling – while for “scope” films the ends were missing.

My Name is Marlo of Marlo Playwrite Production, I am the producer and Director of The Baltimore Apollo. I hold my shows at Frederick Douglass High school. I consider myself truely blessed because the shows are really nice and Baltimore is off the hook with talent. The shows have grown so much and the word is spreading all over, now I’m starting to get talent from other states as well. My dream is to some day have my own Apollo Theatre and Name it, “The Baltimore Apollo”. I never new about this building on Harford rd But I’m very interested in knowing who the owner of this building is and would like to speak with him about purchasing this building and renovating it so Baltimore can have it’s own Apollo Theatre. This is my dream, If any of you have any info about the owner of this building please contact me at 410-970-1025. Thanks and may God continue to bless us all!

Marloplaywrite, I went to the Apollo once, to see “Death Rides A Horse” with Lee Van Cleef. The theater was in its last days.

When J. Louis Rome added the Apollo to the State Theatres Circuit in January of 1921, it was the firm’s fifth Baltimore theatre joining the Poplar, Capitol, Rialto and Broadway. With Powers projection and Minusa screen at opening, the $250,000 neighborhood theatre sported reasonable prices at 22 cents for regular shows and 11 cents for the matinees though Rome said matinee attendance towered over lightly-attended evening shows. A Moller organ added to the presentation and management was by Rome’s relative, Samuel H. Rome.