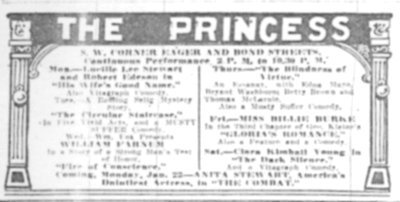 Another small neighborhood house located in the middle of the block. The Princess opened in 1912 and had a short life by closing in 1928. Located in an area of urban decay and neglect, the Urban Renewal that would tear down everything in its path and start again.

The Princess was one of those rare items that stayed standing alone in the middle of the block until the 1980’s. A short time later it met the wrecking ball and a new church was built in its place.