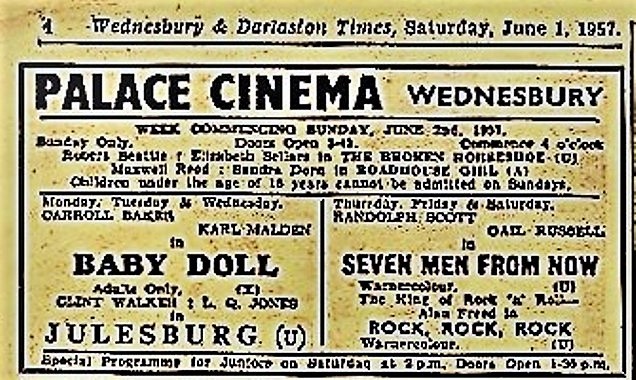 Located in the Black Country town of Wednesbury in the West Midlands. The Imperial Picture Palace was opened on 7th October 1912. It was designed in a Renaissance style by architect C.W.D. Joynson and had 600 seats. The top of the exterior featured a life-sized female figure holding a lighted flare. It was equipped with a British Thomson-Houston(BTH) sound system in late-1931. Operated by Thomas Wood of Bilston, the Imperial Picture Palace was closed on 29th May 1937 with “Not So Dirty”.

Architect Ernest S. Roberts of the architectural firm Satchwell & Roberts had drawn up plans for Thomas Wood to build a new Art Deco style cinema. The old Imperial Picture Palace was retained (and modernised) to become the foyer to the new Palace Cinema, the 1,200 seat auditorium being built at the rear. It had a seating for 895 in the stalls and 354 in the circle. The Palace Cinema was opened on 27th September 1937 with Dick Powell in “Gold Diggers of 1937”. It was equipped with a British Thomson-Houston(BTH) sound system.

It was taken over by Miles Jervis in the 1950’s and in July 1961 Bingo replaced films on Sundays. The Palace Cinema was closed on 9th December 1961 with Mark Forest & Broderick Crawford in “Goliath and the Dragon” and Nicolas Chagrin in “The Fourth Square”.

The building and its contents were sold off on 11th December 1961, but it was not demolished until 1964.