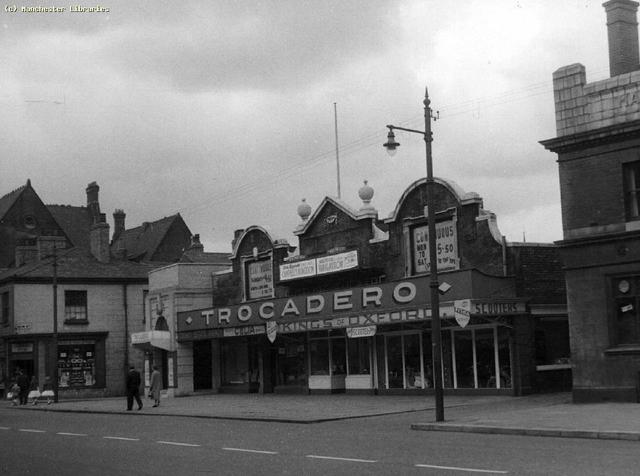 Located in the Rusholme district on the corner of Wilmslow Road and Moor Street (which does not exist today) and opposite Rusholme Grove. The Trocadero Picture Palace opened in August 1912, a conversion of the Rusholme Ice Rink. There was a narrow arched entrance with a corridor leading to the auditorium. All seating was on a single floor and the proscenium was 21ft wide. Around 1930 it was equipped with a British Talking Pictures(BTP) sound system, later changed to a British Acoustic(BA) sound system. It was closed for renovation in February 1963 and soon re-opened, operated by G.B. Snape Group of Assoc. Cinema Companies chain.

On the night of 15th September 1975 a fire broke out in the building, causing considerable damage. The films showing that week were Shirley Corrigan in “Around the World with Fanny Hill” and “The Case of the Smiling Stiff”. It never re-opened and was demolished in the late-1970’s.

The building housing Kings of Oxford selling scooters, was never part of the Trocadero Cinema. It was built several years after the cinema as a retail unit. The Trocadero Cinema entrance is on the left: the small arched white building with a canopy.

As someone who knew the interior of this building intimately, I can report that much of what is above, is not entirely correct. The cinema was not built ‘on the site of’ the Rusholme Ice Rink, it ‘was’ the very same building. All the architectural features of the ice rink, and subsequent ballroom, which appear in the attached photo, remained for the whole of the building’s life. This includes the clerestory roof, which was felted over and painted black, and the orchestra gallery, which remained behind the stage and screen. The rest of the trusswork and side windows were overclad in decorative plaster, with an arched sub-ceiling. Walkways laid on the trusses gave access for maintenance and light-bulb replacement. The original rink/dance-floor remained beneath the raked auditorium flooring. Contrary to the previous comment, I can report that the auditorium did extend for part of the way behind King’s scooter shop. The tiled entrance-way, to the left, only being wide enough for the small box-office and sales kiosk. Immediately behind the raked seating was a narrow rear aisle, giving access to the toilets, staff-room and stairs to the projection box. The rest of the space behind King’s held a small parking yard with several garages built onto the right side of the cinema. These were accessed via the narrow alley-way to the right of the building. The projection box ran almost the full width of the auditorium, above the staffroom and toilets. It contained two 35mm projectors, of the ‘separates’ type. These being composed of a heavy, cast pedestal surmounted by two rails. On these rails were mounted, separately, a self-advancing carbon arc lantern, The film transport assembly and, lastly, the object lens assembly. Hung in front of these was another, separate, wide-angle lens for displaying Cinemascope and similar aspect-ratio presentations. This could be swung in front of the normal object lens, when necessary. To the right of the two, main projectors, was a single slide projector, also carbon-arc, for displaying captions. At the rear of the box was the splicing and rewinding bench, the sound amplification gear and turntable for providing pre-show and interval music. Above the turntable, on a nail, hung the obligatory ‘Fire Record,’ to be played as a signal to the staff should an evacuation prove necessary. On the wall were mounted the open winding, control rheostats for dimming the House Lights and Tab Floods. Because of the limited width of the proscenium, when ‘wide-screen’ films were being shown the screen actually got smaller. This was achieved via a motorised ‘top-mask.’ Latterly, the house was operated by Snape’s Cinema Circuits of Pendlebury, owned by G.B.Snape who also ran the Stanneylands restaurant chain and Salford Rugby Club.