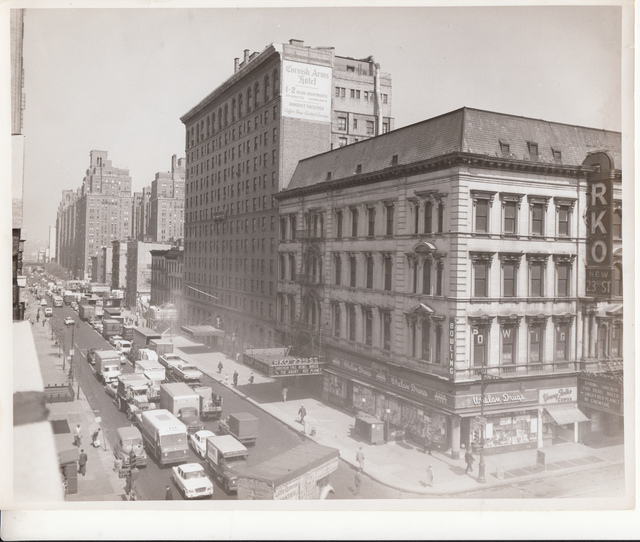 The theatre opened August 4, 1938 with “Having a Wonderful Time” and “Sky Giant”

The theatre closed June 15, 1960, to be demolished for another building. It was destroyed by a fire on June 29, 1960. Later, RKO built what become the third RKO 23rd Street theatre further west on 23rd Street.

Here is another 1937 photo by Berenice Abbott:
http://tinyurl.com/mexc7m

Jerry: The scan is a bit blurry, but Boxoffice Magazine of October 15, 1938, ran an article about the conversion of the Grand Opera House into the RKO 23rd Street, and it has a pair of before-and-after photos showing the foyer and the auditorium.

Joe:
A belated thank you. Great pix. Funny how I remembered the color of the carpeting. The place meant a lot to us. Jerry

I am doing some research on the theater from the Grand Opera House days to the RKO 23rd St. If you’d like to share some information or memories please post or email me. Thanks. Jerry

I grew up in the Chelsea area of NYC. There was the RKO on the corner of 23ST. &8th Ave. There was also the Chelsea between 8th & 9th Ave. on 23rd St. I saw MEn of the Fighting Lady at the Chelsea. The RTko was beautiful. To me as a child it was liking going to a palace.

Oldtimer, I grew up around the corner from the old RKO, my dad was an usher there in the 40s. It truly was beautiful. I remember The Chelsea from the outside but don’t remember going inside. We also went to The Terrace on 23rd Street. When did you attend the old RKO?

The ad shown here should really be under the newer RKO 23rd Street that opened in the 60s.

Thought you all might be interested to know that the box-office street shot provided with this address is actually from the earlier location for this 23rdSt. Proctor’s RKO between 6th & 7th on the west side of 23rd in the middle of that block. I can tell from the buildings being reflected in the glass case displaying the poster for “In the Money.”

Also, “In The Money” was a 1935, mid-August, release. It starred Joan Blondell, Hug Herbert, Glenda Farrell, and it does have a funny bit by Lionel Stander in his usual gravel-voiced character bit: as ‘Butch’ Gonzola. The Grand Opera was still looking for a buyer in 1935 and RKO didn’t convert it until 1938.

Sorry, typo – that’s “Hugh"Herbert. Short (under 90 minute) comedy features were quite the thing for double feature in the 30s. My old man worked for RKO short features as an advance man during this time – before moving back to Paramount.

JwPhillips – the image following “the box office street shot” shows “We’re in the Money” on the RKO 23rd Street marquee. Notice the Grand Opera House designation. I believe the double feature was a re-release.

I just uploaded a 1938 group photo from inside the RKO 23rd St. Does anyone recognize these folks. Gent on the right side looks like Douglas Fairbanks.