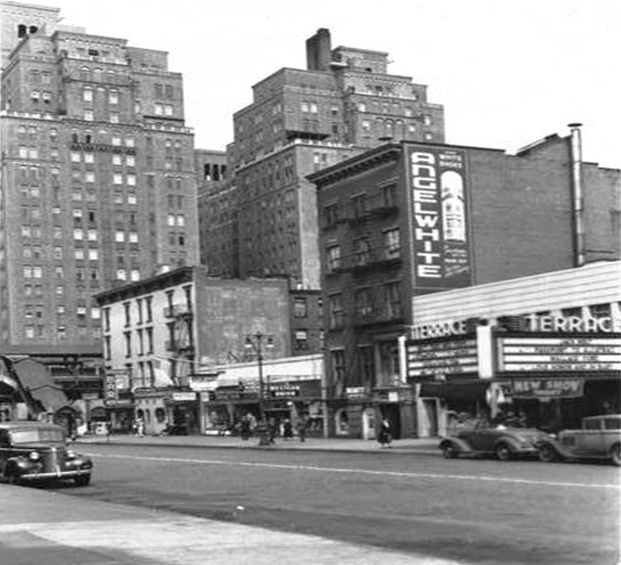 Opened November 2 1937, the Terrace Theater was located on W. 23rd Street between 8th Avenue and 9th Avenue in New York. The fare was double features on a second run or revival basis. Mostly blue-collar audience. Smallish with restrooms in the basement. The ticket seller had a turnstile to let patrons in, thus eliminating the need for a ticket taker. Small lobby. The theater used 14x36 insert posters to advertise movies. A lot of Universal-International in the 1950’s, Francis the Talking Mule, Abbott & Costello, Audie Murphy, etc.

Still searching for that 50s programming from my misspent youth. My dad would go down to the newsstand on 23rd & 8th for the Night Owl edition around 8pm, and I’d make him wait while I watched the Terrace marquee change in the distance.

I assume that the Terrace went to double features after the RKO 23rd Street opened in ‘38 with double bills. The films in Warren’s ad were RKO and Universal films which the RKO circuit would have played after the Broadway opening.

I recall The Terrace showing a lot of MGM & Paramount, in the 50s, which they may have booked after they played at the nearest Loew’s theater, The Sheridan.

But I also recall the Realart re-releases, Roy Rogers Republic films, and a Francis the Talking Mule (U-I- film) so the RKO may have passed on some of the lesser U-I double features.

Anyone have any idea when the Terrace closed? I think it was before the RKO 23rd Street closed in 1960. We have AL’s account of the pistol whipping in late ‘57. But nothing after that.

This is from Boxoffice magazine, January 1938:

New York-Singular evidence of the public’s taste in regard to motion picture programs manifested itself when the Terrace Theater, opened November 2 by the Brandt Circuit, turned to a dual bill policy after a two months' trial with single features.

“There was nothing we could do about it. It seems the public has become accustomed to double features”, “Bingo” Brandt said.

ad for the Terrace Theater Christmas 1955

An item in the April 17, 1935, issue of The Film Daily said that the new theater to be built at 361 W. 23rd Street was located on the site of the former home of actress Lily Langtry.

My continuing search for anything on this theater has led me to a February 11-12, 1959 booking (the latest date that I can verify of the theater’s existence) of the re-release of KING SOLOMON’s MINES which had been making the rounds with SEVEN BRIDES FOR SEVEN BROTHERS although the listing only mentioned one film.

Found weekly listings in New York and Cue magazines. Theater closed 4/28/1960 before the neighborhood was torn down for the ILGWU Co-ops. Programming format in the 1950’s…..Thurs-Sat recent films 2 weeks after Loew’s Sheridan in nearby Greenwich Village, revivals Sun-Mon, Tues-Wed. Many WB re-issues, more foreign films than I expected.