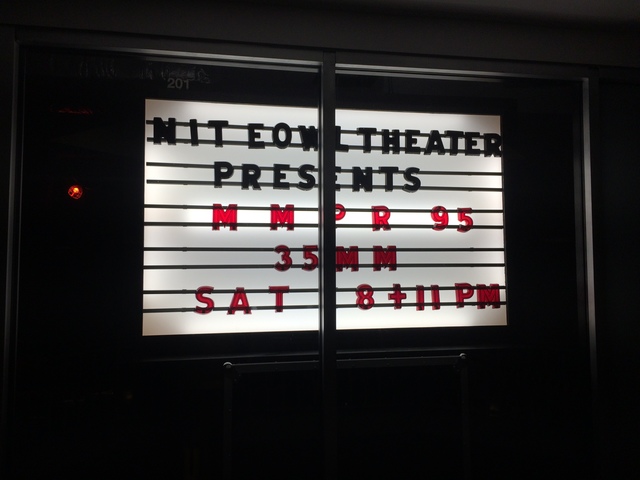 Opened on August 19, 2017, the Nite Owl Theater is nestled within the Miami Design District’s Melin Building. The theater houses a portable, reel-to-reel 35mm projection system, thus being Miami’s first strictly 35mm theater. The theater is open every Saturday night, with programming by Secret Celluloid Society, Miami’s longest-running 35mm film screening series. It was closed on May 5, 2019.

Click here for a video segment from local NBC “6 in the Mix” show about what the Nite Owl is like, Nayib Estefan and his mission to keep 35mm alive, and their Halloween programming.

Awesome, glad to see the Secret Celluloid Society has found a new home here. How is parking?

The Secret Celluloid Society has been around Miami for years, holding screenings at other venues before establishing the Nite Owl for itself.

I never attended a screening and have yet to visit the Nite Owl but I’m guessing “longest-running 35mm film screening series” means of any film appreciation type group that may have been holding screenings using 35mm around town over the years this one has lasted the longest.

Reminds me of Optic Nerve, that would quickly sell out before I ever had a chance to go, that had a screening as recently as 2013 (which I vaguely remember as possibly being the “final” one.)

Also Detonate Microcinema, that ran at least through 2001, that I remember being occasionally listed in the New Times movie times listings back in the 90’s (even though Detonate was a film series, not an operating theater) when a screening was held somewhere, often in bars and restaurants if I remember correctly, of some sort of “underground” film showcase.

I don’t know how often either of these used 35mm, so maybe Secret Celluloid is the “longest running” one that did and does.

These were not really full blown film festivals, but occasional probably one-night only screenings of film showcases in I assume rented or donated spaces.

Does anyone know of others I didn’t mention here?

Al, were there groups that put on film screenings when you lived in Miami? Would be interesting to hear about them.

David, there were groups that did that back then, but they mostly rented existing theatres. The old Grove Movie on Virginia Street and the Merry-Go-Round Playhouse in Coral Gables before it became the Cinematheque, often played film society shows.

Thanks Al. Do you remember the names of any of the groups or films societies? Or maybe the themes of the shows, like from a certain country or director, or something more unusual that I wouldn’t expect?

David, I seem to recall something called ‘Intermedia’ that ran Andy Warhol and other avant garde films back in the early seventies.

The Nite Owl’s Yelp page marks it as “closed”, its official website lists no upcoming screenings beyond May 5th, and comments on its Facebook page are months old…

Oh no I didn’t get to go. I had wanted to see what the vibe of the place felt like.