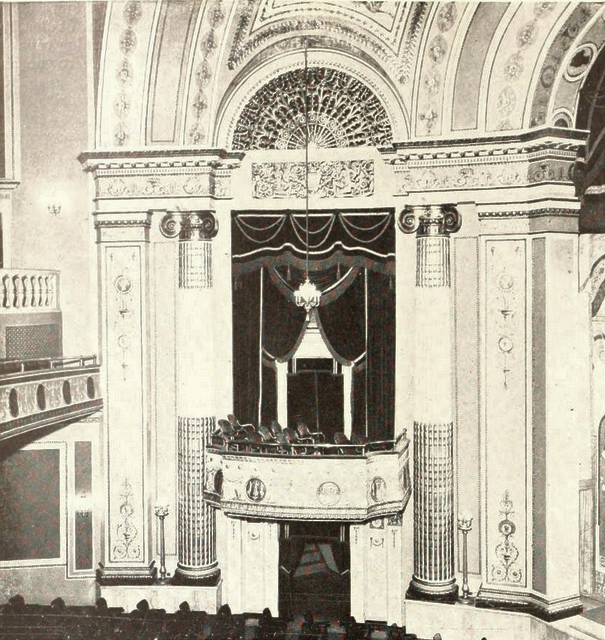 Pawtucket’s “Million Dollar Theatre” opened May 1, 1923 to a packed house, with numerous celebrities in attendence. Designed by local architect John F. O'Malley, the theatre featured a mirrored lobby, an electric chandelier with 4,700 bulbs, and the largest Wurlitzer organ in New England. The theatre was named for owner Charles T. Payne’s son, Leroy, who perished in World War I.

With the exception of its soaring terra cotta spire, the Leroy Theatre featured almost no exterior ornamentation. Originally, only the narrow entrance and ticket booth were exposed to the street. In 1966, the adjacent Payne Building was demolished as part of the Goff Avenue widening project, leaving the theatre’s bare side wall and the external truss supporting the balcony exposed.

After 55 continuous years as a movie and concert showplace, the Leroy Theatre was forced to close in 1978 due to fire code violations. Following several fizzled restoration attempts in the early-1980’s and a demolition company citing the project as “too difficult”, the Blackstone Valley Ballet took over the theatre in 1984. This was short-lived, and in 1985, the building was purchased by Albert J. “Albo” Vitali and played host to boxing, wrestling, and rock concerts. Vitali spent nearly a half million dollars renovating the theatre, and it was declared fully restored on December 18, 1986, with Gregg Allman and Dickie Betts of the Allman Brothers the featured act.

A 1987 power failure caused by Twisted Sister’s amplifying equipment was reported in a trade magazine, and the Leroy Theatre could no longer draw big-name rock acts. Even the restoration didn’t last; by 1988, Vitali was petitioning the City of Pawtucket for money to fix up the theatre. Aid did not come, and following a September 28, 1990 benefit concert by Britt Small and Festival, sponsored by the Rhode Island Vietnam Veterans Motorcycle Club to bring the “Moving Wall” to Rhode Island, the theatre unceremoniously closed for good.

The theatre sat dormant until 1996, when the entire block was acquired by a Boston developer for the construction of a Walgreen’s drugstore. The City’s push for economic development was greater than community efforts to save the theatre; demolition began September 9, 1997 and took six months to complete. Salvage rights to the building were sold to New England Architectural Center, and most of the interior ornamentation presently resides in their Warwick, RI warehouse. Seats were donated to the Shea High School auditorium and to the Sandra Feinstein Gamm Theatre in downtown Pawtucket.

The Leroy Theatre was listed on the National Register of Historic Places in 1983.

Hi, Great stories on the Leroy in Pawtucket. I was a stagehand at the theater from 1977 & 78. I created a website called RI Rocks regarding the venues and music scene that happened there.

I was hoping someone would have a current picture from the outside of the Leroy before it got torn down. The one I have on the website was before my time. Any pictures would be appreciated
Thank you

Loved the Leroy. Saw my first movie there in 1940 with Humphrey Bogart. Always enjoyed looking at the small movie posters on the outside of the theater going up the block. Frank McIlmail, Rochester, MN

The first movie I ever saw there was “Mary Poppins” in the 60s.

The Theatre Historical Society archive has the MGM Theatre Report for the Leroy. It’s Card # 535. There is an exterior photo taken April 1941. The Report says the Leroy is in Good condition, is over 15 years old (as of 1941), does not show MGM product, and has 1,400 seats on the main floor, but then does not list the number of balcony seats. Competition was the Strand Th. in Pawtucket. The 1941 population was 75,700.

The Pawtucket Times featured a host of articles and images on the opening of the theatre, in the issue of April 28, 1923. They can be found at https://pawtucket.advantage-preservation.com/