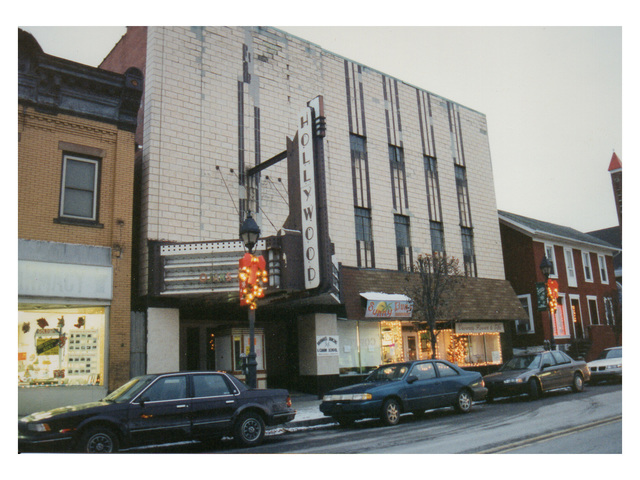 This theater was opened in July 1938 of concrete block construction, and had a 999 seating capacity, all on a stadium plan. Operated into the late-1960’s with the last regular operater being the Friedlander family. Opened several times for concerts or late night showings on an irregular basis during the early-1970’s.

Last opened late-1970’s for a two year stretch or so. Closed in early-1978, and all seats and equipment removed in the 1980’s. Basement housed a bowling alley which was open to the late-1980’s until being flooded. Attached storefront now a florist shop. Marquee still on building. It was demolished around 2012.

Ron, I was just through California, PA last weekend and stopped to take a look at this theater. I would love to see your pictures of it. I would appreciate if you could email me a copy. It looks like it was a beautiful theater before it fell into such disrepair. My email adress is:
Thanks!

Chad, will do what I can. Actually, the theater was never what could be called a showcase or thing of real beauty. This was late 1930’s design, basic and functional. Now I never had the pleasure of seeing it in its original form with the lobby/lounge in the lower floor. All entry doors used to lead to the theater but by my time in the 1960’s the right doors went straight to the bowling alley, the left to the theater.

Inside was an upward walkway to the seating area which led to your choice of main floor or the steps to the balcony area. Not an overhanging balcony but simply an upward extension of the floor. Seating was original to 1938 or so with most of the side lights still working.

Bathrooms were balcony left and right, office was balcony middle with steps one floor down. Projection room was also balcony middle with steps one floor up. Directly behind the marquee was a small room where the letters for the sign were kept and a crawl space entrance to the sign itself. Projection room had a ladder to the walkway that ran the length of the theater, about two feet wide start to finish. Interesting note, in the office was a small room about eight feet wide, six feet long, four feet tall with a locked door. Room was sealed top to bottom, wall to wall, with aluminum foil covering. I’m told it was originally a safe area for money and other items of value but was then used as a pest free room to hold the vending goods.

Stage was large with an amazing array of electrical equipment, full set of lights and curtains and steps to what once was the dressing room area. Off stage right and left were exits and equipment loading areas.

The outside trim and paint scheme was originally brown and light brown. Marquee lighting and neon was functional until the closing of 1978.

Again, not a structural wonder but a good solid building that deserves a better fate. Too tough to kill and too weak to fight, sad.

Here is another view from the same date:
http://tinyurl.com/dmhou3

The Hollywood took a long time to build. Boxoffice noted that fact in its announcement of of July 3, 1937, saying that the opening was scheduled for late October or early November. They had to note the fact again in the issue of July 2, 1938, which said that the Hollywood had by then been under construction for about two years, but that the opening was tentatively scheduled for July 4. There appears to have been a final delay, as Boxoffice of July 23 reported that the Hollywood had been opened “Monday evening.”

The Hollywood was reported to have either 950 or 1000 seats, depending on which issue of Boxoffice you read. The cost of the project was reported as $150,000 or $160,000. The original owners were M. Goldman of Monongahela and his local partner, James Retter, operator of the Grand Theatre in California. On the opening of the Hollywood the Grand was closed.

The theater has been closed since early 1978. Ulu Grossbard’s STRAIGHT TIME starring Dustin Hoffman was the last film to play. The number of seats totaled 999 (one more and it would have sent it into the next tax/fire code bracket!). The architect was a local town resident, Alfred Harris. His grandson still has the original blueprints. For a brief period of my childhood, I lived right next to the building, and an exit door opened right into my back yard. Aside from beginning my movie-loving life there, i also got to know the building in an intimate way only a growing boy could.
In the Fall of 2008 I was asked to return to California Pa. to see if anything could be done with the building. The Redevelopment Authority of Washington County wants to see it demolished to provide more parking spaces for the growing college population of California University of Pennsylvania. My first question was if anyone had actually been IN the building to see what kind of shape it’s in, as my last time within its walls was way back with Dustin in 1978.
We toured the building with masks and hardhats. It was like entering a raised Titanic. After years of neglect, the concrete parapet roof is failing in many, many places, especially along its sides, where the roof meets the exterior walls. Huge sections of plaster walls are now on the floors. One can only guess at the asbestos contained within. Plus, because someone left the projectionist’s fire escape hatch in the projection room open sometime during the 30-year hiatus, the entire building is now a condominium for about 100,000 pigeons. It is not the most pleasant place to be in, nor even close to being the most sanitary. Again, however, the sheer size of the space is still amazing.
I also disagree with Ron S. about The Hollywood not being a thing of any beauty, and I’m not stating this out of any personal prejudice or bias. This building’s design is CLASSIC 1930s Art Deco, and especially in its use of the inclined plane as its structural flow component. It had stadium seating before anyone had ever coined the concept! Further, what Ron may have missed in the 1960s was how prominent the use of specialized lighting and of fabrics were in the theater’s original years. Stories from those who were there and photos from town archives show a sense of style and beauty akin to Jean Harlow’s boudoir. Flambeaux lighting in reds and blues licking the walls when the theater was darkened, stratified cove lighting in the elliptical ceiling, potted palms, velvet curtains — all added up to something very grand and very special, especially for a town like California.
And the original screen which would drop from the fly on the full-sized stage had a fabric border of red velvet and wide swaths in Deco style of SILVER piping, making it, indeed, the silver screen!
Years of high school and college graduations took place there, as well as hundreds of civic events for California and many of its surrounding communities. 999-seats don’t just pop up everywhere.
If the building is to be restored for any use, it is going to require a very high price tag. Structurally it is very strong, but everything from clean-up to modernization, including ADA regs of bathrooms on all levels, etc., is going to have to be addressed. It is a titanic structure, but it needs a ton of work.
Further, the Borough of California has already posted RSPs for demolition. No real schedule has been released as yet, but it is going to be soon.
I am a college professor and teach in the cinema department of a University in Pittsburgh. What I did get to do was take an entire film crew through the building last year and we have it all documented on both video and stills (the lamps we took in to light the place made it glow, even in its decrepit state. I doubt those walls have seen that much light since the roof went on!). Whatever happens, we are planning on cutting a documentary about the building.
If anyone has any ideas or suggestions or answers, now is the time to make them. This great old building’s fate is ticking away.

csepe, You have to remember that by the time the sixties rolled around the Hollywood had zero charm, it was a concrete block box with little to suggest anything resembling “Classic”. Now it’s a broken down eyesore that would indeed make a great parking lot if anyone could fine enough money to tear the darn thing down. I don’t know what looks worse in the boro, the theatre or the old Savage Hotel on the corner of 3rd and Wood.

Union Cleaning Company, almost directly across the street from the site of the Hollywood Theatre’s entrance, is at 316 Third Street, so the most likely address for the theater would have been 317 Third.