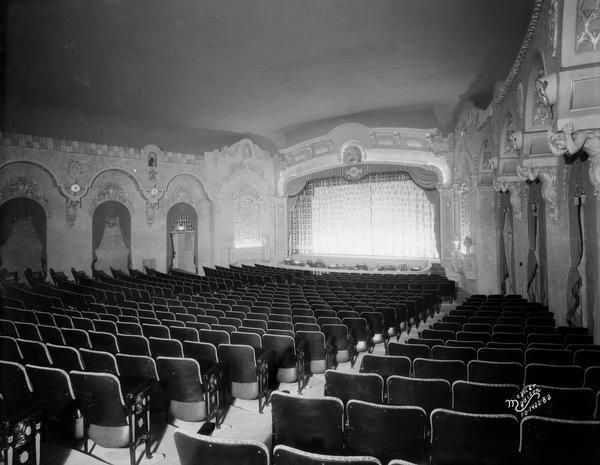 The Eastwood Theatre was opened on December 28, 1929 with seating for 980. This is a very ornate building in an older neighborhood. It has some wonderful live bands performing each weekend.

Regarding this theater’s timeline as a concert venue, Hot Tuna performed there on 3/14/90.

Here is a June 1949 ad from the Wisconsin State Journal:
http://tinyurl.com/cnbvlg

December 20th, 1967 opening ad as Cinema can be found at View link

1960-1967 owned by Madison 20th Century Theaters of Milwaukee, Wisc, Dean D. Fitzgerald, President. In 1967 they owned 7 theaters in Wisconsin, including the Eastwood.

Started being called the Barrymore Theatre in 1987. Stopped showing movies in 1992?

The Kilgen Organ Company of Chicago, about 160 miles from Madison, made about 190 Theater Pipe Organs. In 1930 they installed a Kilgen Theater Pipe Organ in the Eastwood Theatre. It was Opus 4420, a 2/8 manual/rank, keyboards/sets of pipes, Special. Anyone know what happened to the organ?

Dan Barton’s Barton Organ Company of Oshkosh, Wisconsin, about 100 miles from Madison, made about 250 Theater Pipe Organs, making it the 5th largest builder of Theater Pipe Organs. Old records show they installed an organ in the Eastwood in 1923? Is it possible this old record is a mistake, or did the theatre end up not opening for 7 years or did it open, close and then reopen? What happened to this organ?

I never found anything about an Atwood Theatre?

Alford & Klein were going for a Spanish Renaissance, not Italian, style in the Eastwood Theatre. Several photos of the house illustrate this article from the April 5, 1930, issue of Motion Picture News.

The Barrymore Theatre is in the middle of a capital-raising campaign to finance a makeover of its interior this summer. The venue launched the public charity campaign last month to help pay for the renovations, which will encompass new flooring, a fresh coat of paint and new chairs in the 87-year-old theatre. The goal of the “Chair-ity Appeal” is to raise $200,000. Last week, house co-manager Ginny Jenkins said the public campaign had raised $10,000, enough to cover the replacement of about 50 chairs. Both Jenkins and the Barrymore’s other house manager Zach Richmond said the decision to renovate comes after years of hearing extensive community feedback particularly about the state of its 755 turquoise chairs, which are over 50 years old. “Some of the padding is definitely faded,” said Richmond. “Some of the integrity of the chairs, we’re constantly maintaining and fixing them.” Jenkins added “There’s been so much beer and who knows what else spilled on them.“ Jeff Kunkle, a bassist with a local bluegrass band, has performed in the theater for years as part of an annual United Way fundraiser. He said that the building is a gorgeous one. “You walk in, and it’s such a unique place … but it is feeling a little threadbare in places. It could use a facelift,” said Jeff Kunkle. The renovations are to some extent a move to stay competitive as a performance space, said Allen Arntsen, a board member of the Atwood Barrymore Corporation, the nonprofit that owns the theater. “People have (other) places where they’re going to put their shows,” Arntsen said. “We try to operate on a shoestring, but you’ve got to provide a good experience for your event-goers.” General manager Steve Sperling said “There’s a very strong feeling on the board about keeping the theater local and locally owned. We’re trying to do things that will further that.” The Barrymore is a beloved neighborhood institution that has served as an anchor of community development, those involved in the campaign say. “Talking to people who have lived in the area for a long time, this theater … it’s seen as a big turning point in the neighborhood,” said Richmond. The Barrymore will close down for a few months during the summer during the renovations. Summer performances are scheduled at the Barrymore through June 8. A show by Justin Hayward of the Moody Blues on Aug. 30 will be the grand reopening of the Barrymore, said Richmond.

This Theater When It Was Known As Cinema Was More Commonly Named As The Cinema Theatre.