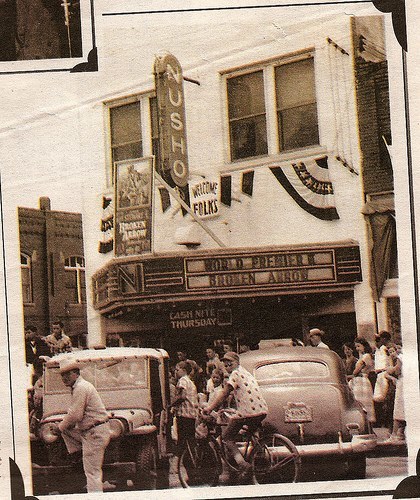 The Nusho Theatre opened on November 3, 1935 with Will Rogers in “Steamboat ‘round the Bend”. Two story theatre building, which hosted the World Premiere of “Broken Arrow” starring James Stewart & Jeff Chandler on July 21, 1950. It was closed on February 15, 1959 with Walt Disney’s “White Wilderness”. It was gutted and converted into law offices.

The building still stands and is today home to Glamour Gowns & More Boutique.

The first appearance of the Nusho Theatre in the FDY was in 1936, making a 1935 opening very likely.

The Nusho opened November 3, 1935 with Will Rogers in “Steamboat ‘round the Bend.” It appears to have launched on a 25-year lease. It was the third theatre in town with the Crystal and Rialto which had each been open in the silent era.

The venue hosted the World Premiere of “Broken Arrow” starring James Stewart & Jeff Chandler on July 21, 1950 which started a minute later at selected Oklahoma theaters including the Criterion in Tulsa. In 1954, it was converted to widescreen to present CinemaScope titles. The Nusho closed with Walt Disney’s “White Wilderness” on February 15, 1959 citing that it lost its lease. Within months it was gutted and remodeled as a mortgage firm.