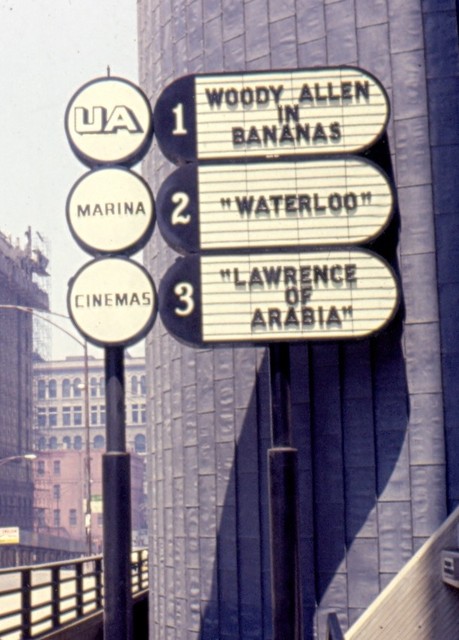 Part of the landmark Marina City towers complex near Chicago’s Loop, right along the Chicago River, built by Bertand Goldberg from 1964-67, the “City Within A City”’s movie theatre was opened on September 25, 1970 and originally could seat about 1,700 in its three auditoriums. (The towers also included an indoor ice-skating rink, bowling alley and dry cleaners, as well as restaurants and, as its name would imply, a marina). It was originally operated by the United Artists chain. The UA Marina Cinemas was closed on May 17, 1977.

After sitting vacant for many years, the former movie house space was gutted and the space is now occupied by part of the House of Blues.

Here is the ad that Mike Rivest mentioned in January 2006:
http://tinyurl.com/ndkfku

I only went to this theatre a few times, when my dad took me to see revivals of KING KONG and some Marx Brothers movies (1971?, I think I still have a couple of handouts from the revival series)and I believe later, for a revival of FANTASIA, although I may be wrong on that one.

September 25th, 1970 grand opening ad is in the photo section.

i went to see movies here many times in the early-mid ‘70s. back then it was still possible to unearth a downtown free parking space on lower level wacker drive (in the vicinity of clark st). the thompson center had yet to replace the greyhound bus terminal. the film programming was near art-house in nature, so a welcome alternative to the mainstream look cinemas. the feeling then was while the old downtown movie palaces definitely were in a state of decline and being avoided more and more, this was not so at marina cinemas, all you had to do was cross the chicago river bridge that’s all. a slight problem was most people, including my friends, tended to forget about the marina cinemas altogether. knowing this i’d suggest a film to see and they’d ask with interest where it’s playing. when i replied marina cinemas they’d pause, finally say “oh, yeah”. then i’d add we’d eat afterwards @ pizzeria due’s just 2 blocks away. and lastly that old photo seen here of the 3 films playing @ 1-2-3 is just perfect IMO—those’re exactly the types of films i’d expect to see advertised playing here on a weekly basis. yes i miss the place and will never violate it’s memory for dan aykroyd’s sake

I sort of had to laugh at the photo of the marquee. Can you imagine seeing something as gigantic as LAWRENCE OF ARABIA on one of those little Marina City screens?

yeah, for that film you want to walk one block south and 3 blocks east, catch the restored LAWRENCE at the McClurg Ct where they ran the restored 70mm version(some years later on in 1989). Marina Cinemas was perfect for Woody Allen films, where i saw EVERYTHING YOU ALWAYS WANTED TO KNOW ABOUT SEX when it opened. what bellylaughs my & my friends had

Given the fact that I was out of town during the majority of Marina Cinemas' era (the theatres were open from 1970-1977, and I was away from 1971-1975) it is not surprising that I never saw a motion picture there. To date I have never been in the Marina City complex. I do appreciate the descriptions provided; thanks!

Construction photo added with credit and link. (Link would not successfully post here in comments.)

1971 photo via Flickr. Looking East, Marina Cinemas on the right.

According to a 1970 newspaper ad (per current Marina City website) the cinemas were Chicago’s first “mini-cinemas”. A Tribune article described them as “Chicago’s first fully automated movie theaters..”. Seating held 296, 198 and 168 people, per same website. The three cinemas closed in 1977 with “Rocky” and “Young Frankenstein” being the last pictures shown there.

After closure of the theaters, the cinema spaces languished for decades. In November 1996, the House of Blues opened at Marina City and (as stated on the entry of this page) the performance space at House of Blues incorporated the former cinemas, in addition to taking-in the building’s upper lobby for the parking garage.