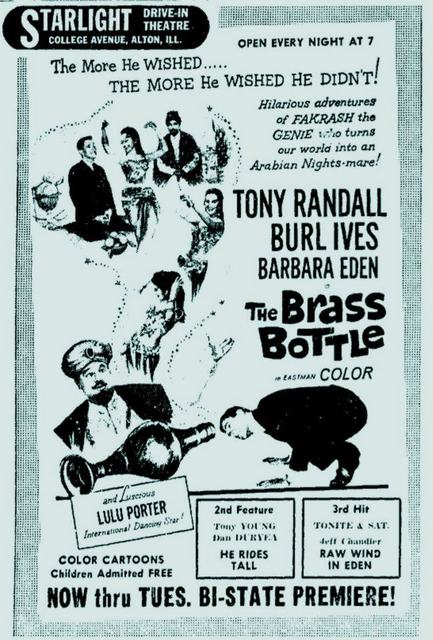 The Starlight Drive-In opened May 6, 1950, and originally had space for 400 cars. The original screen tower was huge, and very futuristic-looking for its day, like something out of a 1930’s Flash Gordon movie set. The drive-in’s name was spelled out in enormous illuminated letters.

In the mid-1970’s, a second screen was added and parking was increased to 960. (Soon afterward, this was reduced to about 800 when a playground was built under the original screen). The theater was part of the BAC Theatres chain for the majority of its time in operation.

The Starlight Drive-In closed October 14, 1984, when the property was sold to a developer, and a medical building was built on the site.

ALTON,ILL.-Rains on April 27 and 28 forced the postponement of the grand opening of the Starlight Drive-In here, owned by the Alton Starlight Corp., in which Joe Goldfarb and Harry Beck of Alton and Charley Goldman of St. Louis are the principal stockholders. New opening date was May 6. It will have accommodations for between 750 and 1,000 cars.

Did BAC eventually take over this theater?

*In the metro east area