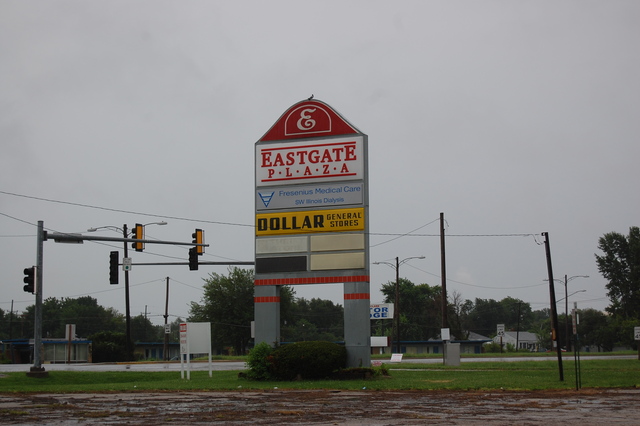 I love this place. Well, I used to. I have many great memories from the time I have worked there, but we won’t get into those (at least too many). I think the best features are the ghosts! They may make things a little nerve-racking from time to time, but hey, it’s still fun. My most personal encounter occured when I was waiting to start a movie once. I had the film threaded and was sitting on a table waiting for the time to press the button. Well, when something began knocking from the inside of the locked store room door, I decided it was time. I radioed the manager, pressed the button, and booked it down those stairs. She laughed at my panicked appearance. It’s always scary at the moment, but looking back it’s awesome.

Originally built by the Jerry Lewis Cinemas chain, it opened on June 20, 1973 just as that chain folded. It was soon taken over by Kerasotes Theatres as the Lewis & Clark Eastgate Cinema 1 & 2. In 1990 it was expanded to 6-screens. It was taken over by AMC Theatres in June 2010.

AMC took over operation from Kerasotes in June 2010.

And today it reappeared. Go figure….

The Eastgate Shopping Center was a $6 million project announced in the Fall of 1958. It would open theatre-less anchored by JC Penney and W. T. Grant’s Expansion in 1972 led to the creation of the latest Jerry Lewis Twin Cinema by shopping center developer Clarence Decker. Construction began October 5, 1972 and as the theatre was set to make its launch as the Jerry Lewis Twin Cinema at Eastgate, the Lewis Chain and its parent, Network Cinema Corp., had disbanded.

The Jerry Lewis signage was not installed and the name was changed using a different Lewis in its moniker. The Lewis & Clark Eastgate Cinema I and II launched on June 20, 1973. It was the first area hard-top theater to launch since the nearby Roxana Theater’s opening in 1941. It launched with “The World’s Greatest Athlete” and a double-feature of “Slither' and “Wicked Wicked.”

The projection area featured living room styled seating for a VIP experience. Cinema I was bathed in blue and white known as the “Blue Cinema” and the Cinema II was decked in red and white and nicknamed “Red Cinema.” Kerasotes Circuit took on the location and in 1978, the Cinema began marketing as just the Eastgate Cinema I and II. In January of 1989, Kerasotes unveiled a plan to expand the operation from two to four screens. But it changed that to expansion six screens in 1990.

In 2010, Kerasotes was bought by AMC and the venue became the AMC Eastgate Cinema 6. In 2016, AMC bought Carmike and it rebranded its portfolio with two classes of theaters: AMC and AMC Classic. This location, although never having any association with Carmike, became rebranded as the AMC Classic Eastgate 6 Cinema.

Not to be pessimistic but I doubt that this location will reopen. The aftermath of this pandemic will likely result in many small theaters like this one going under.

Casey – though I don’t know the status of this particular location, a lot of fringe movie houses – small and “discount” houses – that are reaching end of leasing agreement during this pandemic are indeed going to be a long shot to reopen. The fallout could be steep.

It really sucks – many more people will lose jobs all because of this horrible virus. Even the bigger chains like AMC and Regal will likely have to close many of their locations. I hope they don’t go under – but this location likely will.