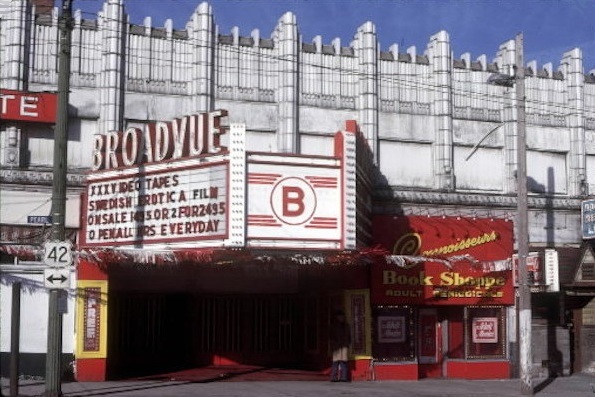 This theatre opened January 16, 1927 with Marceline Day in “College Days” aka “The Younger Generation”. It was a neighborhood movie theatre with 2,100 seats and was equipped with an organ that was opened by organist Walter Trimmer.

The theatre closed again on March 28, 1987, and had since been demolished to make way for a retail store (first Medic Drug, now a Family Dollar).

I was a volenteer back during the 80’s when OBCDC was trying to renovate and have many pictures of the interior. I will be glad to upload a few when the option is turned back on. Otherwise I believe the style was Greco-Roman, but the exterior was definatly Art-Deco.
It’s seating capacity when it opened was 2100, and she first opened her doors on January 15, 1927 as a movie / vaudeville house.

I put some interior shots on flickr, hopfully I did this right.
Here is a pic of the ceiling

Always hate to see a theatre go the smut route.

At least when an old theatre is showing ‘smut’ we can get in to see the once grand place. It’s better than having it shuttered and demolished.