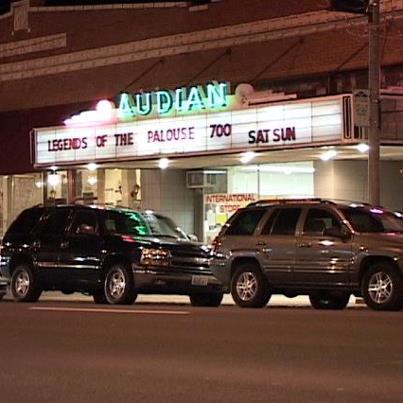 Located at 315 E. Main Street in downtown Pullman, the historic Audian Theatre is a majestic example of the type of single-screen theatre that once dominated towns throughout the United States.

The Audian Theatre and its sister theatre the Cordova Theatre, have been the main options for Pullman moviegoers for more than 70 years. The Big Sky Motor Movie on Wawawai Road operated from the 1950’s until the early-1980’s, and The Old Post Office Theatre opened in the 1980’s but closed several years ago. The Pullman Drive-In Theatre was located near the present-day city playfields and pre-dated the Big Sky Motor Movie, but closed in the late-1950’s. The Varsity Drive-In was located on the Pullman-Moscow highway near the current site of Champion Electric. It closed in the early-1970’s.

The Audian Theatre was closed for a time in the mid-1990’s. Best Theatres Inc. reopened the Audian Theatre in December of 1997. The theatre was thoroughly cleaned, repainted and a completely new DTS digital sound system was installed. A redesigned concession stand and a modern popcorn machine were also added later.

The Audian Theatre has been given new life with record-breaking engagements of the new “Star Wars” and “The Lord of the Rings” trilogies. Its large auditorium and impressive sound system are its strengths.

Many current and former Pullman residents have thanked us for continuing to keep the Audian Theatre open despite the trend to close single-screen theatres. We thank all of our patrons for supporting this classic theatre that has been such an important part of downtown Pullman. It was closed in 2014.

Photo (“X” out of the print screen):
View link

Pullman, by Robert Luedeking and the Whitman County Historical Society (Google Books preview) says that the Audian Theatre had previously been called the Grand Theatre. There’s a photo of the Grand from about 1920, and the building is quite recognizable from the terra cotta cornice and parapet trim it still sports.

The 1936 reconstruction of the Audian, which was nearing completion in late summer, according to the September 12 issue of The Film Daily that year, was apparently confined to the auditorium and the interior of the building. I haven’t found any early mentions of the Grand Theatre in trade publications, but it was being advertised in the Pullman Herald in 1916.

This brought back memories of happy times in Pullman. Between them the three single-screen theatres managed to provide something fresh for me and my wife to watch most weeks between 1998 and 2001 (with the occasion trip to the multi-screen in Moscow plus the WSU film society). Sad to hear that the Old Post Office has closed, though I’m not hugely surprised. One diamond memory was going to a midnight showing of Terminator there with the adjoining gun shop putting on a display of the guns used in the film (potentially a classic cultural experience, not to be missed for two wide-eyed Brits). In reality the guns were less 1980s Terminator and more 1914 trench warfare and the theatre put the 4th reel on before the 3rd so we saw the end of the film part way through! Happys days though. When we finally get round to our WA family vacation we’ll be sure to catch a movie at the Audian.

Appears to be closed. Phone is disconnected and not listed on pullmanmovies.com.

Shame. I guess there’s always the Cordova. Trolleyguy, please don’t tell me the Cordova’s closed too.

Sorry, Ben. Check the Cordova hyperlink for nearby theatres and it comes up closed.