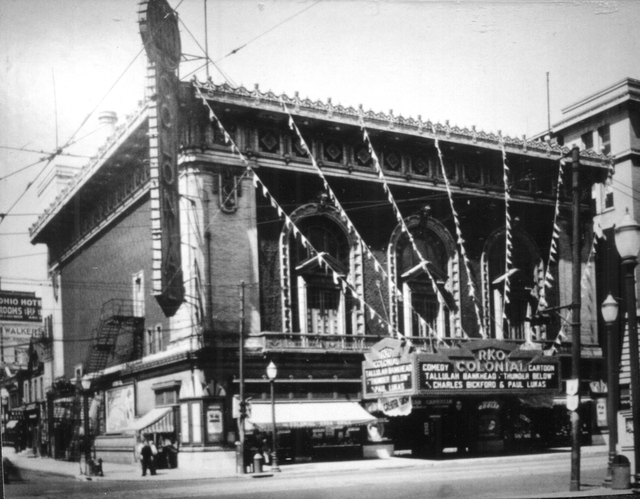 The Strand Theatre opened on November 12, 1912 to much fanfare. The owner Edward W. Hanley spared no expense and his architect obliged by traveling to several theatres in the East for ideas. The theatre had no gallery, only a first floor and a balcony which was divided into two sections by an aisle that ran parallel with the row of seats. This arrangement allowed the charging of two different prices, separating the upper row from the more desirable seats, which were reserved. The theatre also featured twenty individual dressing rooms as well as two chorus rooms. It was later renamed National Theatre.

Following renovations, B.F. Keiths circuit leased the theatre and brought in vaudeville when it was renamed B.F. Keith’s Theatre from September 20, 1915. On September 26, 1921 the name was changed to Liberty Theatre and it was presenting ‘Shubert Vaudeville’. By 1923 the management was desperately trying to stay afloat and started showing a number of different programs like westerns and burlesque. The theatre name was again changed to Gayety Theatre in 1923 which did little to help the struggling theatre. In 1924 the theatre was managed by B.F. Keiths and they brought back popular stage shows and movies. On September 22, 1928 the Colonial Theatre featured Dayton’s first “talkies” the movie “Lights of New York” drew large crowds.

In 1930, the Colonial Theatre became part of RKO and started showing second run and B movies and by 1964 the theatre was sold to St. John’s Lutheran Church. It was closed on January 3, 1965 with Jock Mahoney in “The Walls of Hell” & Francis Lederer in “Blood Creature”(Terror is a Man). It was demolished in 1965 to build their new church. The company hired to demolish the theatre had their work cut out for them; the theatre did not die easily with it’s solid construction.

I also knew the projectionist in this theater and visited him a few times during 1960-61. I can’t remember the interior of the projection room as much as others.

I am looking for a picture of the ticket booth. I think I have it but it is disassembled—

Any help would be appreciated

You can direct you email to
.com

I would try the theatre historical society…they have alot of resources…If you know the name of the architect, that would help as well….I am curious, How did you come across this ticket both? Please share any photos you might have.

I have been a theatre historian for over 30 years. I have many pictures of the Dayton theatres, including a photo of the auditorium of the Colonial, one of my favotite theatres. Just to set the record straight, the Colonial theatre did not have the oval skylight that was mentioned earlier. The only theatre in Dayton having that feature was the Lowes theatre on N. Main St. The skylight was closed-in a few years before the theatre closed because of people throwing things, even spitting down onto the audience below. Let me add vaudville did not die until the 1930s when talking movies opened the door for the great vaudville performers to go to hollywood and contribute to the golden age of hollywood, Fred Astaire, Judy Garland W.C Fields, Bob Hope and many more. RKO (Radio pictures, Keith, Orpheum) eventually had four superb theatres in Dayton The RKO Keiths, Colonial, State, and Strand.

I goofed, RKO should be RCA, Keith’s, Orpheum, and Radio Pictures.

I too am very interested in Theatres of Dayton, OH….I have searched high and low for photos of all the great theatres that use to be here….in particular interior photos…I cannot find anything on the Keiths, Colonial, State, Strand or the Lowes…I have searched the local history room, Montgomery Co. Historical Society and local newspapers…nothing..Would you be interested in sharing your collection? I can be contacted at …Thanks

Garygadjet…are you there? Please contact me at I would love to speak to you about your photo collection….seems that no one has many photos of dayton theatres. 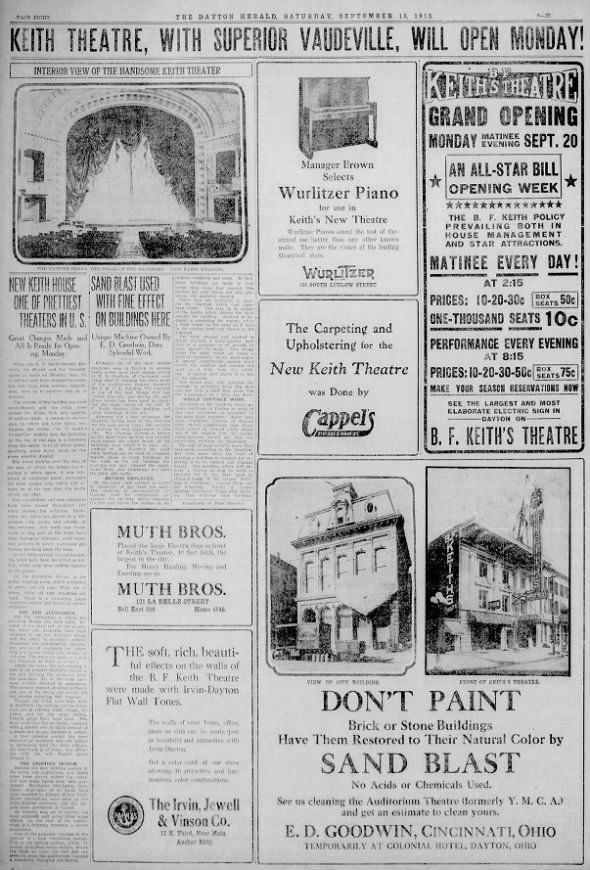 This reopened as the Liberty theatre on September 26th, 1921. Grand opening ad in the photo section.

The RKO Colonial Theatre closed on January 30, 1965 with a double feature of “Walls of Hell” and “Blood Creature.” A salvage sale was held which included the stone goddesses at just $200 per goddess. A bargain.